Tooms Lake, worth a visit early in the season 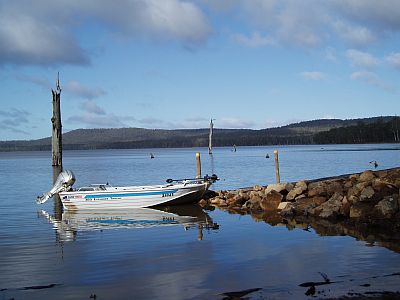 Many anglers traditionally celebrate the opening of the trout season at one of the highland waters. Of these, Arthurs Lake is always popular and this year it is a good option after its recovery last season from persistent low water levels. Likewise, the condition of fish at Woods Lake, Great Lake, and Penstock and Little Pine lagoons, should have improved since last season and catch rates should not disappoint those keen enough to brave the highland conditions on the opening weekend. Woods Lake generally offers more sheltered conditions than Arthurs and Great Lake, and the access road was upgraded during the closed season, so this water will be a good option early in the season.

Lake Echo remains one fishery to watch. It is being developed and managed along the same lines as Great Lake, being a similar large water with a good head of both brown and rainbow trout. It is not nearly as popular as Great Lake however, despite good catch rates reported over the past two seasons. Improved access for boating anglers with a new boat ramp at its north-western, should help to increase its popularity over the coming season.

Lakes in the Bronte-Bradys system are a good option for opening weekend and should provide some great fishing throughout the season. These waters are easily accessed from the Lyell Highway and offer a variety of fish species with reasonable catch rates. Bradys Lake receives a boost of adult brown trout from Great Lake each year, and catch rates at Bronte Lagoon have been improving steadily over the past two seasons.

In the North, good options are Four Springs and Huntsman lakes, as well as Brumbies Creek, Brushy Lagoon and Curries River Reservoir. Four Springs is usually popular on the opening weekend and fishes well for browns and rainbows, while anglers at Huntsman should experience good catches of well conditioned brown trout.

Lake Barrington is likely to be popular for anglers in the North West at the start of the season along with the Pet and Guide Dams. Lake Barrington in particular, receives periodic stocking with Atlantic salmon and adult rainbows when these become available during the season. Apart from still waters, there are a number of excellent river fisheries in the North West region which should be popular amongst local anglers, including the Emu, Leven, Mersey and Meander rivers.

Lake Burbury on the West Coast, as well as Lakes Rosebery and Mackintosh, are productive fisheries that are well worth consideration but perhaps not on the opening weekend for anglers other than West coasters. These waters are popular with locals and anglers from the North West and are likely to be considered more favourably by visitors planning a fishing trip later in the season.

Craigbourne Dam was stocked intensively last season so as to rejuvenate the fishery after it recovered from several years of persistent drought. In its most recent stockings in June and early July, Craigbourne received over 6,000 adult rainbows and 530 Atlantic salmon, while Lake Meadowbank was stocked with 220 trophy sized Atlantic salmon at the end of July.

Tooms Lake, Lake Leake and Lake Dulverton in the South and East of the State are definitely worth a thought for somewhere to go on opening weekend and in the early months of the season. Although the catch rates may not be as high as in some of the premium highland waters or those stocked ‘popular’ waters, the fish caught are likely to be in good condition following the extended period of improved water levels. Being lowland waters too, they are a sensible option for the opening weekend which is usually accompanied by cold and blustery winter weather.

The Inland Fisheries Service wishes all anglers a safe, productive and happy fishing experience for the start of the 2010-11 angling season.