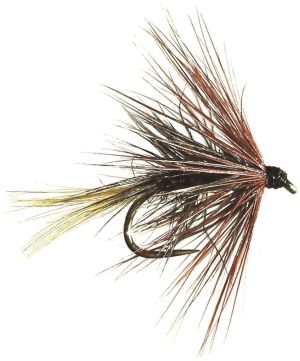 Presented from Issue 110, June 2014
Winter is a time to reflect on the past season and contemplate the new one. In recent articles I mentioned what a hard season it was - especially for fishers of the dry fly. We had some good fishing to hatching stoneflies in November, but after that the best results were usually on wet flies with sinking lines.

I reckon this sort of fishing is hard work, but it certainly gave us some good results. Of course it makes sense, because as we all know eighty percent of a trout’s food is in the water, not on it. So with little surface activity it has been most important to find the depth the fish are at.

With all the gear we have at our service these days such as fish finders and lines to plumb any depth you can find the fish. Catching them might be a different story, but you know where they are.

Recently I was asked how to tied laid-back hackles for wet flies. This was for Woolly Buggers and English wets. I rarely use cock hackles, but favor the softer hen necks which give much more movement and life like action.

The fly I have chosen for this issue is a great little bob fly, which suits the fly from last issue (phantom).

The Kate McLaren was given to me by a friend from Scotland and I rate it very highly as a bob fly. This can be used on both floating and sinking lines. On a floating line when there is a good wave pull it quickly. On a sinking line retrieve half way and then lift the rod high, bringing the Kate to the surface, and create a wake through the surface.

2. Tie in rib firmly, dub on black seals fur and wind forward, finishing back a little from the eye.

3. Take black hen hackle and tie in so the curve of the feather is curl back towards the bend. Wind hackle to bend and then wind gold rib forward through hackle. Bind rib in with thread and cut away tip of hen hackle at bend.

4. With the brown head hackle tie in closely in front of the body hackle, wind forward to the eye and then back to where thread is hanging. Bring the thread through the hackle to the eye, cut away excess hackle.

You want a fly with hackles that looks similar to the photo.