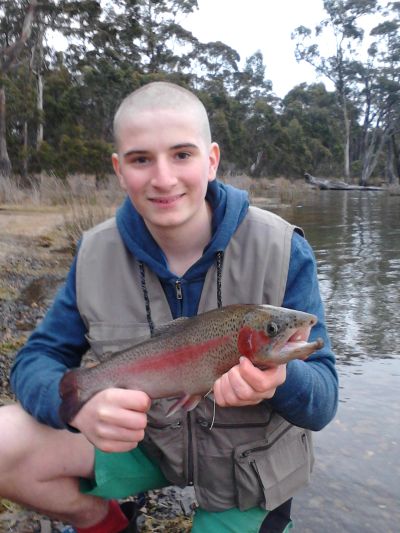 By Samuel Evans
With winter finally behind us, spring has arrived, along with the swallows.
Insects are hatching and the trout are on the move. Spring has brought warmer weather with water temperature increasing a couple of degrees, making the trout a bit more active.
There have been a few rough wild and windy days, at the lake, most fishermen have been accessing the lake from the boat ramp around at Lake Leake, then taking to the shelted parts of the lake by boat, but for us and our 4hp motor we wouldn’t have got out of Kalangadoo Bay, the wind would have pushed us back up onto the boat ramp, so we waited for calmer, safer days, which has given us some awesome catches from our boat, along with fishing from the shore.
Mick, (our next door neighbour) has been showing my brother and me, all the different insect eggs along the edge of the shore line, and now that warmer weather is here, they will start to hatch, and we’ll see a bit more activity on top of the water.
Afternoon fishing towards the Snowy has saw fisherman produce some nice trout, some have even caught their bag limit, by fly (black or green woolly bugga or a cat fly) in the shallows, and trolling with any type soft plastic. I’ve caught most of mine on the Yep Tassie tackle, Black and gold T-tail, it’s similar to the Berkley black and gold t-tail… but I think it performs much better in the water!
With a couple of nice quite a warm evenings and lots of insects about, we are able to spot trout smutting on the surface. The fish were well and truly on the bite.  One evening, nearly every cast, a trout would follow you in, so we would swap our lures around until we found what they were after. Connor went back to good old trusty Loftys green and gold spinner. I went for the a Berkley Gulp Pumpkin seed soft plastic minnow, caught a couple of nice trout in top notch condition, around the 2 pound mark, but as soon as I could take a couple of photos of my trout, Connor would say he’s on and of course it would have to be a 3 pound rainbow.
Clarks Point seems to be the place for the Rapalers at the moment, with a couple of fishermen landing nice sized trout.
Over the past week Kalangadoo Bay has been dead still, with heaps of fish rising, or just smutting an insect off the water.  But as it goes with fishing, some people are catching, whilst other are putting in the time but catching nothing.
It’s been an awesome 5 weeks since the start season, and I’m looking forward to the next 7 months of fishing!!
Thanks to all the fishermen who take the time and have a chat to me.
So find the time and wet the line.
Samuel Evans 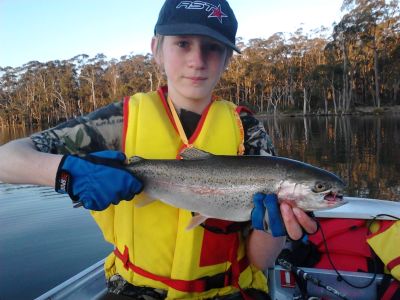 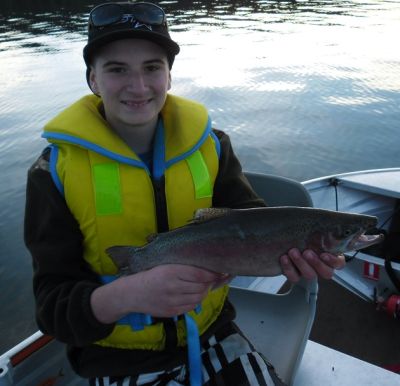 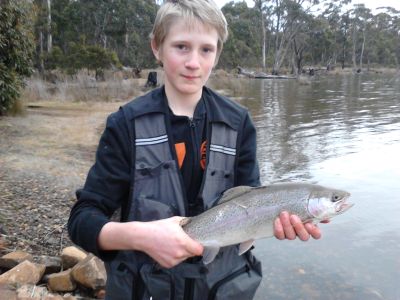