Presented from Issue 109, April 2014
Situated approximately 1 hour and 20 minutes from Launceston is a water that flies under the radar of many…Lake Leake.

Although a fair bit has been written about it over the years, this water remain largely underutilised and doesn’t receive the amount of attention from anglers as it deserves. Both browns and rainbows inhabit this water and they can be quite a size.

They are perhaps the best average size of any water in Tasmania.

The fishing here can be very hard, which perhaps, in turn, puts paid to many follow up visits. That said, if you do strike it at the right time, the rewards can be great as Mark Tapsell and Todd Lambert found out recently. Todd explains... 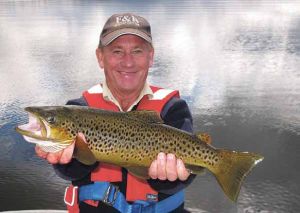 Leaving home at 5.30 armed with both fly and soft plastic rods has been a matter of course for me this season, time is in short supply and when I head out, I like to catch fish.

A fly rod has always been my preferred method of trout fishing and I would like to think I go alright with it. I tie my own fly patterns and although not a “Peter Hayes” cast by a long stretch, I have learned to improvise, especially when fishing in a boat. I have found that those same fish that can be caught with a thirty foot line cast with deadly accuracy, can also be caught by “setting a trap”.

I cut my teeth on this sort of fishing here at Lake Leake.

Wind lane fishing in March and April can be sensational at Lake Leake, although it can also be very localised and spasmodic.

Sometimes you can be on the water at daylight and find yourself in a quandary as to which fish to cast to, whilst on other occasions not an insect is to be found - and no rising fish.

If the planets align and the fish are spotted — generally heading upwind in one of these lanes I like to get down as low as I can and sidle up as close as I dare. My little tinny keeps quite a low profile, but keep as low as you can.

Often the only fly that is needed is a nymph hung 150mm under a dry… It is not often refused. Cast about three metres in front of your quarry and wait. Sometimes the fish will take the nymph, dry or ignore it all completely.

The rainbows are a bit more erratic, it seems, and travel a good bit faster than the browns. It can be very exciting fishing.

An electric motor is a “must have” for this type of fishing and sometimes you can sneak up on the fish, but you might also never get closer than 25 metres. Being a good caster is no disadvantage.

But what happens when there is no fly life on the water and there are no fish to be spotted? Time to bring out my plan “B” — the soft plastics. There is little doubt that soft plastic fishing has revolutionised the way many fish for trout nowadays and “Plan B” worked well for Mark and I on a recent trip here.

After searching the water for the tell-tale signs of a fish sipping off the surface and with little hope of spotting a dorsal and tail fin, our enthusiasm started to wane.

Big fish NOW — Next season - even bigger Not a sign of life was spotted, no insect life, the water cloudy and it became quickly apparent that we were on “a hiding to nothing” should we persevere on this path.

Perhaps and we were both too cunning, lazy or old (take your pick) to strip wet flies? Regardless of that, “for better or for worse” out came the soft plastic rods.

Casting around submerged structure we landed eight fantastically conditioned trout between us that ranged anywhere between 2.5 to 5 pounds, all caught in the space of a couple of hours. These fish are deep orange fleshed and prime condition, with small heads and big bodies.

Obviously the improved rainfall and raised water levels witnessed in recent seasons has increased the abundance of food here and it’s hard to believe the difference in fish quality from last year. I have heard of double figure fish being landed this season and firmly believe that many leviathans remain in its depths.

Fishing the right depth is paramount in importance as is the use a fish finder. Look for weed beds coming up off the bottom.

Mid March it had an average depth of around three to four metres and, a 1 1/2th jig head seemed to be the best weight to use.

Retrieves need to be quite slow as is the flick of the rod tip when imparting movement.

Mark fishes very light with three pound tippet and leader. I am not as forgiving and use four pound fire line braid and a six pound leader with a length of around 2 1/2 metres.

Anywhere along the Big Timber shoreline and up to the mouth of the Snowy river entrance.

Stumps Bay and Kalangadoo Bay and behind the island is also very productive.

I don’t believe it matters much, just look for structure and weed on your sounder and you’re in with a good chance.

There is a boat launch ramp in at the Lake Leake campground, behind the Hotel, also Kalangadoo bay has an informal site wherein you launch off the lakes edge.

Wind direction plays a big part in where you should launch on the day.

I understand MAST is about to upgrade the Campground ramp over the winter time.

As a final note, if you haven’t fished here before, please be aware of the many submerged stumps and trees, and observe the 5 knot limit, if you don’t, you do so at your peril. Lake Leake, it’s worth the effort, for the quality of fish alone. 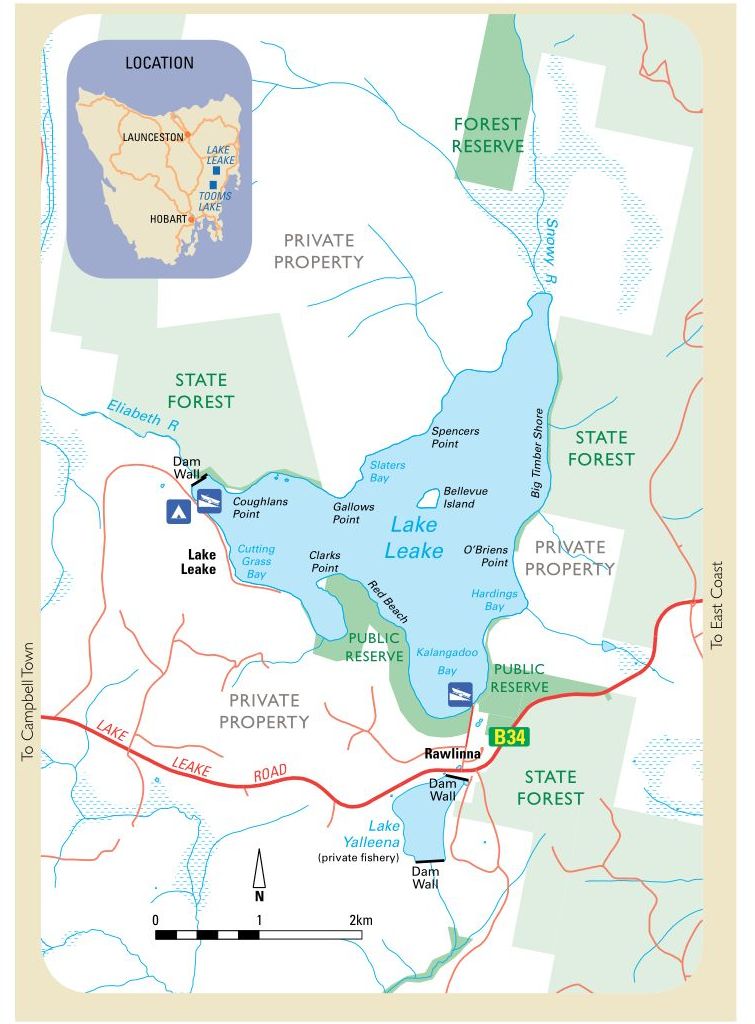 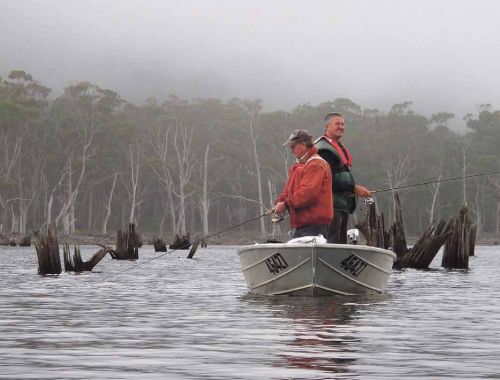 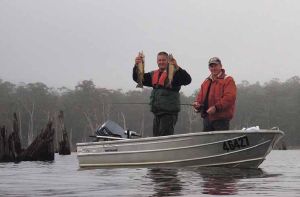