Travis, Jamie and his son Patrick (in one boat ) and Dale, his son Trevor, myself and daughter Demi (in another), made our way to St Helens this morning seeking Kingfish and Albacore Tuna.
Demi was very excited as she had always wanted to have a go at this type of fishing,  but up until now was always told to stay at home as I feared that the heavy sea's would make her sick .
My thinking was  it's a long day watching your daughter being sick over the side, (especially when I" ve been there myself on a couple of occasions!!!.)
I needn't of worried , as  a 30 knot North Westerly that came in at around 10am and belted us from pillar to post, didn't make her ill or curb her excitement in the least,and  I think that shows in one of the pictures when you see the look on her face.
We managed only 5 stripy Tuna, even though we went all the way out to the Billalong Patch in search of something bigger ......but it wasn't to be today.
Jamie and Travis went out to an area named The Cliffs, and lost a sizable fish, but that was the only one that turned the drag on their reels for the day.
We  returned to Travis and Liz's block at  St Helens around 2pm for a BBQ and made our weary way home.
Travis, Liz, Patrick and Jamie are staying on to do a bit of fishing in Georges Bay tomorrow, so hopefully they will do a bit better if the weather gives them a break.
Demi can't wait to go again, ...... Dale Howard through his generosity in taking us out, has obviously created a monster, such was her excitement in today's proceedings.
Although we didnt set the world on fire, it was a great day.....Thanks Guys n Gals
cheers,
Todd 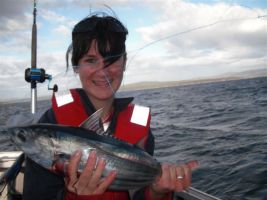 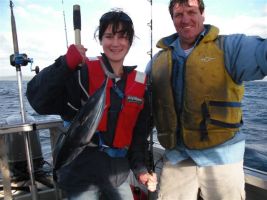 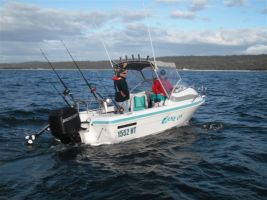