Trout season off to a slow start

My first couple of days (3rd & 5th August) of the 2019/20 trout season started like this... With the 2019/20 Trout Season well under way I have had a couple of trips to check out a few waters around the place. I haven't really got myself fired up enough to put a lot of time into chasing the trout yet due to the very low water temps in the rivers & streams due to snow melt. I reckon it's just an age thing, being 73 years of age I don't feel the need to push myself too early in the season, besides it's too damn cold anyway. So what I've done over the past couple of days is just hop in a river & stream (that weren't running too high) here and there for twenty to forty minutes and test out my new Okuma Celilo 6'6'' & 6' ULS 1-3kg trout rods, Okuma Helios SX 20 reels and give the Platypus lines & Mepps fluo lures a short workout for when I do get serious. I'll tell you now, the Okuma gear I used is the perfect trout set up, beautifully balanced & light weight which is perfect for trout fishing, the Helios SX20 reel runs nice & smooth and is a pleasure to use. The water temp in the rivers I've had a practice sessions in has been in the 2 - 3 degree range and I can tell you now, it was bloody freezing, hence the short time I spent in them.. I did manage a couple of hook ups on a Mepps #0 Aglia fluo tiger spinner in a small creek but lost both fish. After the three month lay off each trip helps me to hone up my casting skills and gets me a little fitter after my hibernation period. I'll start to get into it over the coming weeks once the days slowly get warmer and hopefully the snow will have eased off. Last season I only had four trips to the rivers in August with just 15 trout caught & released, then in September I had five trips for 21 trout caught & released. Hopefully it won't be all that long before I have my first trout of the 2019/20 trout season in the net.

** Monday 12th August...
With a very dull, cold and windy day I left it until 1:30 PM when the air temp was around ten degrees before I decided I would go and have a spin session in a small sheltered tannin stream some fifteen kilometres from home. On my way there a crossed a small stream that I've never noticed before, probably due to me being set on fishing the one I was heading to today. Any way to cut a long story short I saw the land owner in the paddock near the bridge so I pulled over and went and had a chat with him. This little tannin stream had a nice flow to it plus it was also a very tight skinny water which was to my liking. He said I was quite welcome to fish it if & when ever I liked which was great to hear. Then he told me he doubt that there's any trout in it, but there could be a few blackfish to be caught. Blackfish rarely takes a lure even though I have managed to catch four on the little Mepps black fury over several years in these small tannin streams.

After spending around thirty minutes chatting with him I headed off through the paddocks, walked for around a kilometre to where I hopped into the dark tannin water. I started off the spin session using the same 6' Okuma set up that I used from my previous (3rd & 5th) trips, only this time the lure of choice was a Mepps #0 Aglia fluo spinner in a rainbow colour. It was just on 2:30 PM when I hit the water and boy it was cold, even with the thermal clothing on the cold still got through. A water temp check saw it sitting around the 2-3 degree mark, same temp as the other river/streams fished a week ago. Any way I started working my way up this skinny little stream without a sign of a trout over the first one hundred or more meters fished. I was thinking that the farmer was correct in what he said. I knew with the water being so cold it wasn't going to be easy any way even if there were trout in this small water. The good thing was I was having a pretty nice workout (fitness wise) as well as honing my casting skills in some very tight areas.

Yes, I did manage to catch a few overhanging tea trees from time to time as well which isn't all that unusual for me. Once a lure lobs in a tea tree it doesn't give it back, one has to go and retrieve it.. I came to a nice open area of medium flowing water and it was here I had my first take, a small brown that only stayed on for a few seconds before it tossed the spinner. It wasn't a real aggressive attack on the lure either, it was just a light tap, tap at it. When I felt the light taps that's when I gave the rod a light twitch to make the lure blade flutter, that's when the trout took it. Icy cold water is always hard when trout fishing and one really has to work to stimulate the trout into taking a lure. Even with the fluo coloured lures in low water temps the trout more often than not really need to be stimulated into taking them. It took me another ten minutes before I was onto another small brown, this one was lost in the same way as the last, it tossed the spinner. That trout did the same as the last trout, a couple of light taps at the lure & I did the same procedure. The trout were only being lipped hence the reason for tossing the lure so easily, the thing I was most happy with was that there were trout in this little tannin stream. I didn't really mind all that much that I had lost the two trout so far, I knew it was only a matter of time before one stayed on to get my first trout of the season.

The calmness had gone too, the wind had arrived here and was really strong & gusty which was making casting that little more tougher, not only that it was a cold wind. I had three changes of spinners over the following 60 meters of water, first one was a small #00 gold Aglia, then to a new #0 XD spinner in a rainbow design, after that on went a #0 Aglia fluo in the tiger patten. Not a sign of a trout over that distance covered which was a little surprising. It still didn't deflate me because I knew there were trout here and like I stated earlier, it was just a matter of time before I had my first of the season in the net. I went back to the spinner I started off with, the Aglia fluo rainbow model. It was a good decision because ten minutes after changing to it I had the first trout of the season well hooked and soon in hand. Not a large fish, but a nice little 260 gram brown and a lovely coloured fish it was.. I had a score on the board, my first trout of the season and that's what counted most of all. That little brown was different to the other two, this one really hit the lure hard and fast, it was full on aggression.

With around one hundred meters left before I was back to where I had parked the car I was hoping for one more trout to end the spin session. It wasn't until I was within thirty meters of the car when I was working the spinner in the last stretch of water before I was to call it a day. It was on the third cast and retrieve in a nice deep stretch of river when I felt a light bump on the lure, so I gave the rod a light twitch, “BANG” it was fish on. A solid brown had taken it, after a couple of minutes battling with the brown I had it in the net. It was a beautifully coloured tannin water wild brown trout, one that went 455 grams. That fish topped off a great 1-1/2 hours in a very cold skinny tannin water, a session that finished on a high, as cold as the day & water was it was it was well worth the effort today. I will venture back to this little tannin water some time down the track when the water temps become a little warmer. I'm sure it will produce more trout later in the season than it did today. 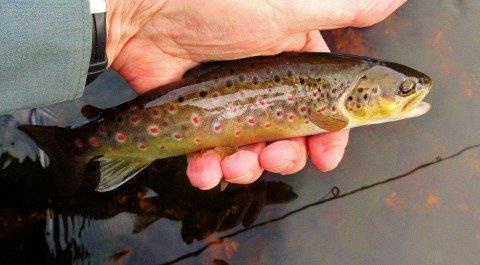 First trout of the 2919 20 season ready for release 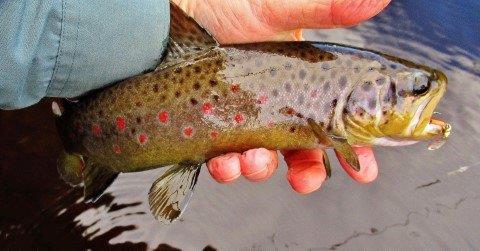 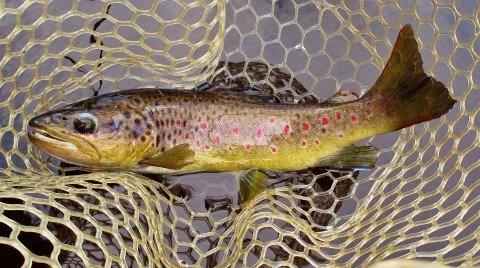 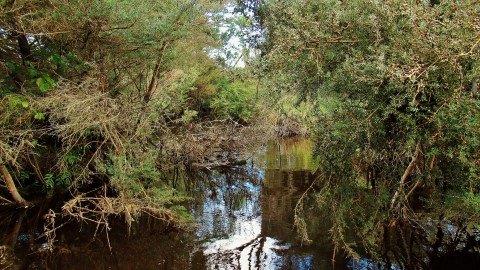 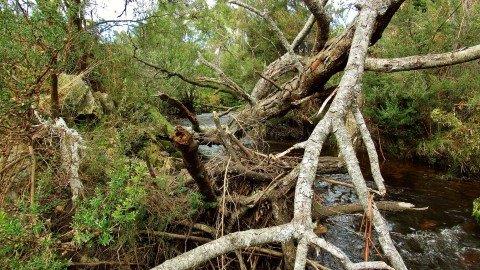 Small stream has it hazards