Eight trout in a one hour session

Another cool dull overcast day had me scratching my head to where I would go for a spin session and with rain forecast I decided to fish a small tannin stream on private property around 15 kilometres from home. No sooner had I left home there was some light drizzle but no sooner had I arrived it was gone but there was still more to come from what I could see. After a brisk fifteen minutes walk I was in the stream and ready for action, well that was what I was hoping for. The first twenty meters or so were a little quiet with just the one follow from a small brown, a good sign to see a trout here for starters.

A little further up I had a couple of soft hits from another small brown before it eventually took the little gold aglia spinner, ten seconds later it tossed the spinner. When I moved into the next stretch of water I flicked the little gold spinner to the top left hand side and retrieved it back in a flat water close to the river bank. Giving the rod a light twitch every so often on the retrieve to make the spinner blade flutter I soon had a brown take it, this one was well and truly hooked. It wasn't a big fish by any means, just a small well conditioned beautifully coloured little wild brown trout. A little further up the river I picked up my second small brown using the same method that sucked in the first fish. With two trout from three takes I was reasonably satisfied because I wasn't expecting too much here today.

The next stretch of water was a narrow one, it was here I picked up another brown, this one was a much better fish that went 285 grams. The little #00 Mepps gold aglia was doing it's job well so far and I was hoping it would continue to do so. Not all that long after releasing that brown I picked up trout number four from a small flat water close to the river bank. The flat water I picked that little brown from was one that I reckon the inexperienced trout fisho's would have bypassed.

Four trout caught and released in the first half an hour was good and with light drizzle setting in I doubt I would be in the water for too much longer seeing as I only had a long sleeved shirt on. I still wanted to catch a few more before I got too damp so I hurried on and bypassed a couple of shallow runs until I reached some deeper stretches of water. In three of the five deep stretches or water fished I did catch and release another four browns from five takes.

After catching trout number eight which was also the best fish of the day by ten grams I called it a day. Every trout hooked today was in the flat water areas close to the river banks that had a bubble line (a great trout food line) running next to it. The wind had started to pick up and it was getting quite cold, even more so with the light drizzle that had set in. So with eight trout landed from ten hook ups over an hour was in my books a fairly good spin session. 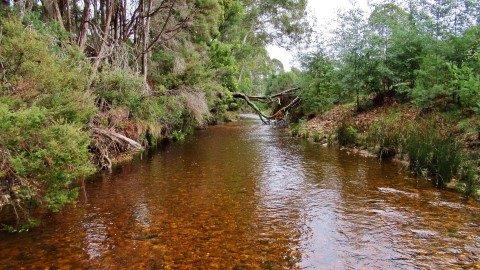 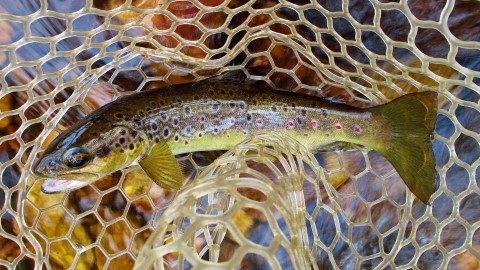 Best trout on the day 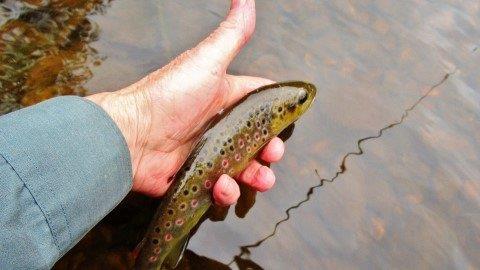 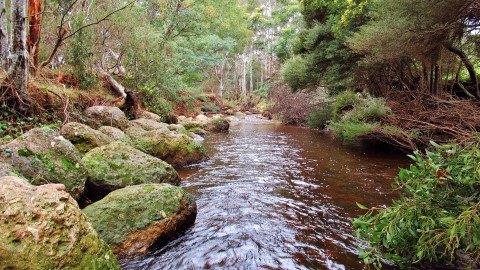 Narrow water that gave up a brown