I decided to have an afternoon trip to the river (private prop) in what was pretty cool overcast conditions with a very light breeze. I'm fishing a one kilometer stretch of river that runs through a friends property and I'm hoping it's running clear enough for a spin session. After a twenty minute walk through his paddocks it wasn't long before I was at the river. It was running a little higher than I had expected, but it was clear enough to spin fish and that's all that mattered. I started off with a Mepps #00 gold blade Aglia mainly because at this time of year it's the best colour to use in cold water. A silver or fluoro coloured spinner are good too and will catch fish in cold water early in the season.

I worked my way along this little river only to find the trout weren't out and about where I'm fishing at this stage. This first stretch I fished usually gives up a few trout too, but not today. I came to a small ninety degree bend in the river that had a nice little eddy in it, certainly was a good holding area for trout.

It only took three cast and retrieves when a small 300 gram brown took the Aglia, it played merry hell for it's size. Being a river fish they do that all the way to the net where they still play up. As the spinner came over a shallow sand bank in front of me I watched that little brown come up behind it before it made a fast smash and grab at it. The following two sections of river I did have a few hit and misses, that's when I decided to change over to a gold F3 Rapala. The change of lure did the job in the next stretch of river where I picked up two more browns from three hook ups. They weren't big fish either with the best one going 360 grams, they were both nice well conditioned browns.

I came to another ninety degree bend in the river that was much wider and deeper than the one I fished earlier, this pool has given up a few browns before when I have fished here. On the second cast and retrieve I felt a bit of weight come onto the lure, it felt like I had picked up a bit of the green algae that was in the river. I gave the rod a light jerk and it came free and that's when I spotted a large brown following the lure and gabbing at it all the way into the shallows. I even stopped the retrieve because that's when they'll often take it. The next cast this large cunning fish just cruised up behind the lure, nudged it a few times then turned and moved back into the deep light tannin water. It repeated the same thing three times with three different hard body lures that I flicked into that pool, all with the same result. At one stage it swam up and around me in the river as I stood motionless. Today the luck was on his side, next time if he's still there, it will go my way.. That brown would have been close on 3 lb, a solid and beautifully coloured fish.

I fished on for another three hundred meters where I picked up two more browns from five hook ups until I came to an area on the river where flood damage work (from June 2016) had been carried out. The river here was wide, shallow and full of green cotton like algae and that's when I called it a day. It was one of those days that could have been better had that large brown and a few others taken the lure. It wasn't to be, “no good crying over spilt milk” as they say...

First brown of the session 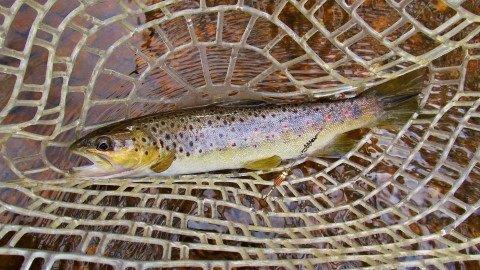 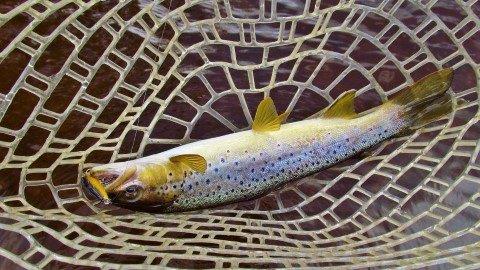 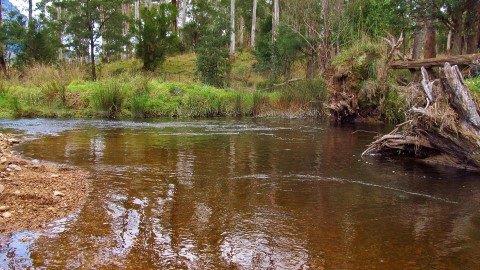 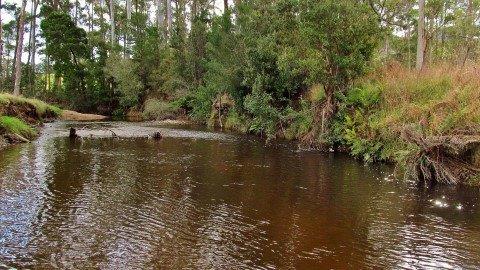