Headed off around 8:00 am for a spin session in the river this morning only to find the river was running a little on the high side and it wasn't safe enough for me to cross over. That's what I get for not checking the river levels before I left home. I decided to head on up to the upper reaches of it where I knew it was safe enough to hop in and wade. This is when it's handy knowing the rivers I fish so after so many years of fishing in them, one gets to know them like the back of your hand. I headed to one of my favourite areas only to find someone else already in the river fishing which meant I had to fish elsewhere.

I decided on fishing another long wide stretch of river that didn't fish all that well last season when I fished it. The river here was running at medium height and just like the sky it was on the cloudy side & a dark tannin colour which was good to see. These conditions can quite good with lower visibility in the water, they will often grab whatever goes near them. That's when the Mepps blade spinners excels over a hard body lures because of the solid vibration that's sent out as the metal blade rotates as the lure is retrieved through the water. This is where the Aglia lure works at it's best as it has a larger blade and a wider rotation, so it's the perfect lure for these conditions today.

A strong Northerly was forecast for later in the day so I had to hurry up and get my act together. With the water being the way it is I kicked the session off with the Mepps #1 Aglia Furia and things were a little slow at the start when I hooked and lost the first two trout which didn't impress me. Then it all started to fall into place as i started getting quite a few hook ups and they were all making it to the net. Some were small browns and others were in the medium size range. With it being such a dull overcast morning the wide slow flowing water was producing a few trout as well, had it been in full sun it may have been a lot different though. It was the fast water stretches that gave up most the majority of the fish.

The cast and drift method worked a treat today in the fast water because they wee nice wide runs and I had plenty of area to work using that method of fishing. It was nice to finally catch some larger trout too and even better I managed to catch & release four nice rainbows with two of them going over the 400 gram mark. I did have one beautiful rainbow in the 500 gram plus range give me merry hell before it straightened the treble causing me to lose it.(the fish that is). A few times I was going to call it a day then I would hook and land a trout and that kept me moving onto the next stretch of fast water.

In the end I became too sore in the body and thought it best to end the session. I finally called it a day at 1.40pm when the Northerly hit and started howling straight down the river at around 30 kph. Today was one of my best spin sessions of the trout season by far with 18 browns & 4 rainbows being caught and released from 28 hook ups. It was a session I was not expecting to happen either. I was quite happy after I had caught six trout early on & wasn't expecting to catch many more..I did have to put on a new Aglia Furia after breaking the treble hook, that was the only downfall on the day. The new Okuma 6'6'' L/Wt 1-3 kg trout rod did it's job really well too, it's a nice light well balanced rod. I would liked to have caught two more trout as that would have put me on two hundred for the season. I'm still well down for the same time last season when I was on 309 trout. Actually it was on the 30th November last season I fished the upper reaches of this river for 27 browns & 1 rainbow.. Any way it was still a great spin session today & a good decision to head up there. 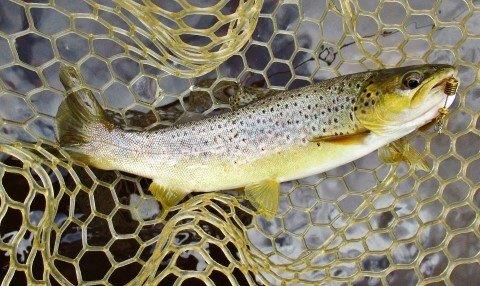 Finally one is in the net 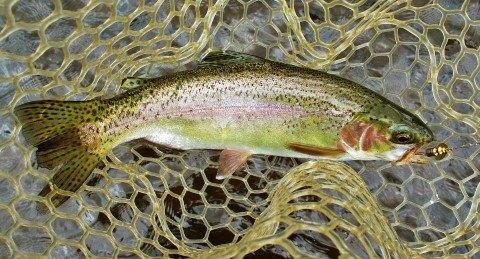 Rainbow No 2 of the day taken in shallow fast water 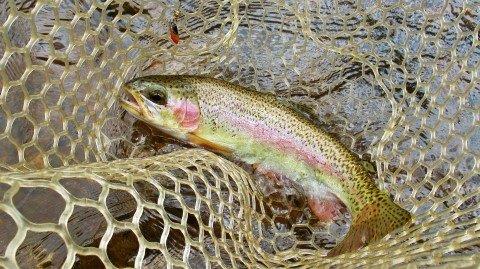 The last rainbow of the day 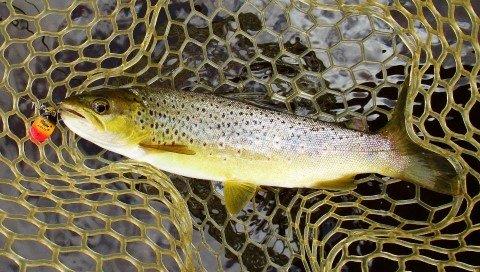 The second trout of the session 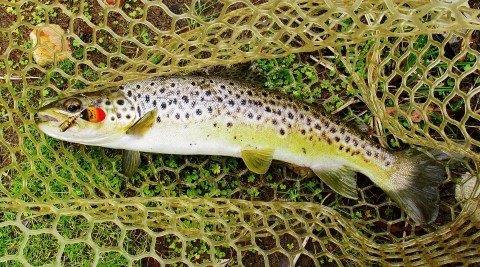 Trout number 18 for the day