Finally I managed to get to a river earlier that I normally do, though it wasn't all that much earlier as it was 7:00am when I was finally in the Mersey River. This trip was to the same area that gave up 22 trout six days ago, I'm hoping it will again today. There was only a few problems I had to contend with, that was clear sky, clear water & thousands of insects hovering above the river & on the water surface. The trout were there in large numbers too, they were all surface feeding, so today wasn't a day for the spin fisher at all. A top morning for the fly fisherman providing they can match the hatch with a trout fly. There was still plenty of good flow in the river & with the trout surface feeding, fishing the fast water runs will be where I'll have the best chance of catching a few trout.

The first medium fast water I had a solid hit and miss then nothing after that, the following run wasn't any better.. I moved into a wide stretch of river and just stood there watching the trout rising and surface feeding from one side of the river to the other. Insects were everywhere, even landing on me and crawling all over my face, even getting on the inside my sunnies which was quite annoying.

I continued fishing my way upstream, even with the trout surface feeding I managed to get a few light hit and misses on the Aglia Furia spinner. I tried a couple of small light hard body lures, nothing happened with them, so it was back to the Furia. Not long after going back to the spinner I finally had my first trout on, after a nice tussle with a medium size brown it was soon in the net, photographed & back in the river. That fish was caught at 9:45 am, so it had taken a while to catch my first trout of the morning.. It was just on 10.20 am when I reached the fast water runs, from here on I caught several nice browns, five were caught and released from eight hook ups.

The fast water was the place to fish that's for sure, just a shame there wasn't enough of them in the upper reaches here. What surprised me was the lack of rainbow trout here this trip, where as the last trip I hooked five of them in this area.. Today there wasn't a single hook up or follow from one. The sun was well overhead, it was getting pretty warm and a strong Northerly breeze had arrived. I was a good kilometre away from the car so I called it a day at 11:50 am. It was 12:15 by the time I got back to the car totally stuffed, the walk back along the rocky river banks wasn't all that easy in the warm windy conditions. I felt I was lucky to catch half a dozen trout today given the conditions were set against me from the start. 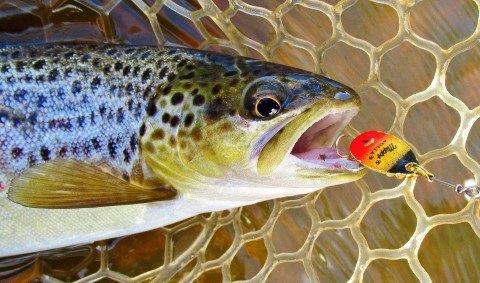 Close up of the first trout caught 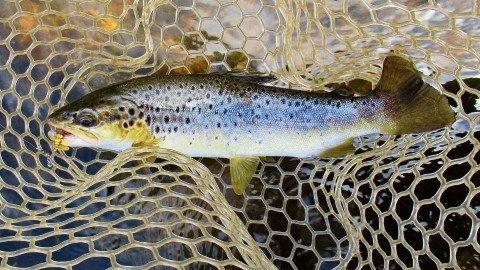 One of a few trout taken in fast water 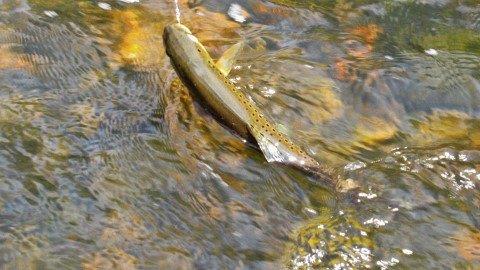 Brown taken in the Aglia Furia in fast water 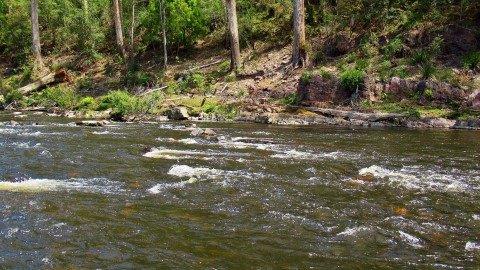 Flat water near river bank gave up a brown trout 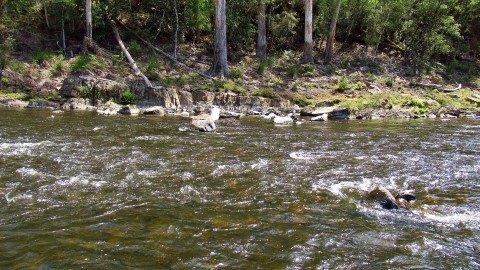