After checking out the rivers levels on the BOM site I noticed the Mersey River had dropped to a lower level that made it ideal for wading in the area I like to cross over and fish. When I arrived to where I cross the river I noticed that the river bottom wasn't looking all that good, I'd have to make sure to take it slow & steady as I crossed over. The water was nice a clear, but the rocky river bottom was covered in a brown slimy algae and heavily silted.

There was some green cotton like algae on the rocks which is a common site early into the season & that normally breaks up as the season goes on. It's the brown algae that's the main problem in the river now days, it never goes away. Even in the upper reaches are full of it in and around Weegena & Liena where it was rarely seen over the years I've fished there. It's certainly not a pristine trout water any more that's for sure and I have no idea what can be done to fix the problem either.

The trout aren't there like they once were either and I'm sure that's due to the quality of the river bottom that's the problem. Any way back to the trout fishing, as I was half way across the river I decided to flick the Aglia Furia straight up the river and retrieve it back down in the medium flowing water. It was on the second cast and retrieve when I had a hook up and my first trout of the season from the Mersey was soon in hand. It was a bright silver coloured brown trout (280 gms) that actually looked more like a sea run trout than a river brown trout.

There was hardly a sign of any red spots or brown colouring on it, still it was the first trout of the day and I was happy with the result. Once across the river I headed of for a half kilometre walk down to an area I could re-enter the river and fish my way back upstream. It was a beautiful afternoon to be in a river with clear skies, 16 degrees and a 10-15 kph breeze, just ideal for trout fishing. This trip I was using the new Okuma Inspira ISX 20B spinning reel, a small light weight reel that's perfectly suited to the Okuma Celilo Finesse ULS 6'6'' 1-3 kg trout rod I use in the larger rivers.

The first fast water run didn't give up a fish let alone even a follow, it was the second run that gave up my second trout of the session. It was after I had I crossed back over the river to fish another fast water run when a nice 415 gram brown took the Aglia Furia spinner on the first cast and retrieve. I had cast the spinner up and across the fast water to let it drift with the flow, no sooner had the lure hit the water it was taken by the trout. With two trout caught and released in reasonable quick time I thought I was going to be in for a very good spin session.

A little further up the river I had two follows from a couple of nice browns, those trout just sat some 20cms behind the spinner for a short distance before moving off. From then on every stretch of water I fished there wasn't a sign of a trout, until I finally picked up a very small (240gm) brown in a fast water run using the cast and drift method again. It was so small it wasn't even worth taking a photo of, I just unhooked it as quick as possible and released it.

It had taken another forty five minutes to catch my third trout, the fast start I had was now down to snail pace. I continued fishing my way upstream trying a variety of lures all to no avail, no signs of fish so after another forty five minutes I decided it was time to toss in the towel & head back to the car. On the way back I had to walk along the side of a small river that flowed into the Mersey so I flicked a lure into it and picked up a very small rainbow trout, my first rainbow for the trout season. 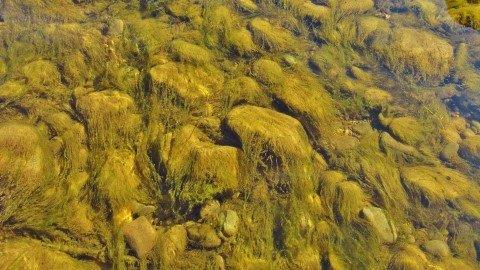 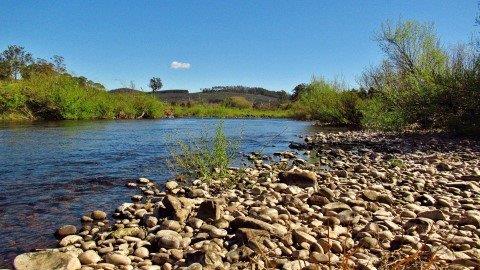 A nice medium flowing run without any trout

Still plenty of water coming down 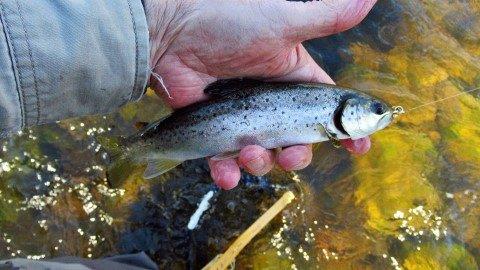 The first of the session 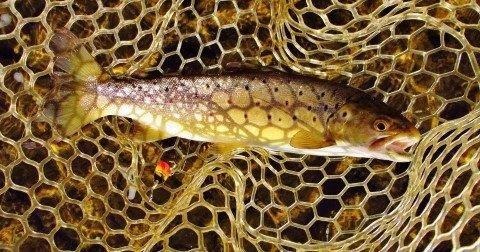 The second trout taken today on the Furia