Feeling the effects this morning of the long stint in the upper Mersey River yesterday I was going to have a rest day then when I saw how overcast it was I just had to go chasing trout. Trout fishing in these conditions is what I like best and I couldn't sit home and let it pass me by. After taking a couple of pain killers and placing several heat patches on the lower back and left hip I was on my way to the lower reaches of the Mersey River.

I did think of heading to another area in the upper reaches but with the body being on the sore side I thought it best to go closer to home. As I approached the river I spotted several trout surface feeding in a wide slow flowing stretch of water, perfect for a fly fisher, not so good for the spin fisher such as me.

After a fifteen minute walk over some very rocky ground I was at my entry point, a medium/fast water run was the first to be fished. Seeing those trout surface feeding fishing the slow flowing runs would be difficult in getting the trout to take a spinner or hard body lure unless it was a small aggressive fish or a rainbow trout. The large browns rarely take a spinner when surface feeding on midges & duns and there were plenty of them in the air and on the water this morning.

I have caught some decent size trout on the Stone Fly & March Brown Bug spinners at times when trout have been surface feeding, but it's not easy in doing so. I get plenty of follows from them but that's as far as it goes most times, the times I have caught them is when the spinner no sooner hits the water near them and they turn a take it straight away. Then there's the time when a surface feeding trout becomes aggressive and takes the Bug spinner.I used to attach a drop fly to the anti-kink and that often sucked them in, the only problem was the tangled mess that came with it.

When a trout takes the drop fly that's tied to the anti-kink some sixteen inches above the spinner the spinner to goes every which way when the trout makes several leaps from the river. I did use the drop fly set up quite a lot until the day I went to hold the trout and it played up which caused the spinners treble hook to become embedded in my hand. Having a trout hooked on the drop fly while being held in the left hand and a treble hook stuck in the right hand isn't pleasant at all. What I had to do was release the trout first before removing the treble hook from the hand, it wasn't all that easy.

The hardest part was getting the pointed nose pliers from the pocket of my fishing vest. So now days I rarely use the drop fly even though I've been tempted to do so those memories come flowing back. This is one of the problems one has to contend with when fishing alone, but that's how I've always trout fished.. Any way back to the spin session, I started off with a #1 Aglia Furia because it's a great all round spinner that regularly produces fish in fast water and medium/slow flowing runs.

The very first cast up and across the fast water it was taken by a small rainbow trout that pulled as hard as a solid 500 gram brown would. It was nowhere near that size at all it was just a small 280 gram fish but like all rainbows they are great fighters for there size. A few casts later in the same stretch of water I hooked and lost another small rainbow, then hooked and lost a small brown. Ahead of me was a long run of slow to medium flowing water and it was here I had a follow from a large brown, a fish that would have been close to 1.5 kgs.

It just sat a few inches behind the Furia with no sign of aggression, twitching the rod to make the spinner blade flutter didn't do anything either. Normally that sucks them in, but this was a large wise fish and that's why it's still in the river, maybe on a another day it would work on it. I changed over to a new #1 Stone Fly spinner and gave it a good work out in the same area, the same thing happened again with that brown, he wasn't into it today.

Several minutes later I spotted it surface feeding close to the opposite river bank, flicked the spinner to where it was feeding, same thing happened. I tried several hard body lures and I never got a follow on them so it was back to the stone fly, this time I went for the smaller #0 (2.5gram) spinner. I did have a few casts in some slow flowing water on my way to the next fast water run all I managed in it was a follow from a medium size brown. Once in the fast water it took around fifteen minutes when I had a hook up from a solid brown that I drew from a narrow flat water close the the right hand river bank.

It was a beautiful size fish too, as it made a run down stream while keeping the pressure on the line suddenly the fish was gone. At first I thought it had spat the spinner but once I had retrieved the stone fly I found one of the hooks on the treble was missing, it had broken off. This was probably my fault for not keeping a check on the treble hooks of a well used spinner. A lot of trout had been caught on that lure so I should have checked the trebles more often when giving the hooks a touch up to keep them sharp.

It was back to the new #1 Stone Fly and onto the next fast water run where I picked up the first brown trout of the morning, a small 315 gram fish. The slippery rocky river bottom wasn't helping my hip and back all that much so I decided I would call it a day, if I pushed on all I would do is aggravate it all the more and be laid up for a week or so. As I crossed back over the river to make my way back to the car I flicked the spinner straight up the river where earlier on I had seen several trout surface feeding.

I couldn't believe it when it was taken hard and fast by a small brown, I had the third trout of the session in hand. Catching that trout did get me thinking should I turn around and continue on with the spin session or not, I decided on the latter. On the walk back to the car I flicked a smaller #00 Stone Fly spinner into a small stream that flowed into the Mersey River, I was lucky enough to suck in another small brown trout to end the short two hour all round trip from Sheffield. Three small browns & a rainbow wasn't all that bad in the end from seven hook ups. Tomorrow is definitely going to be a rest day for sure.. 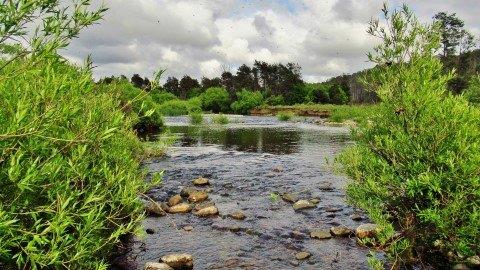 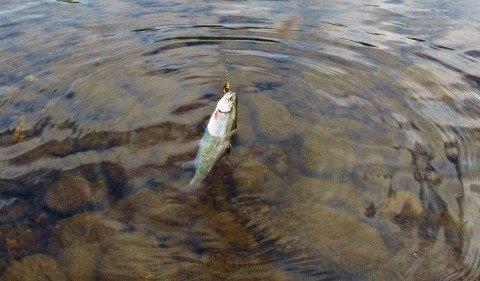 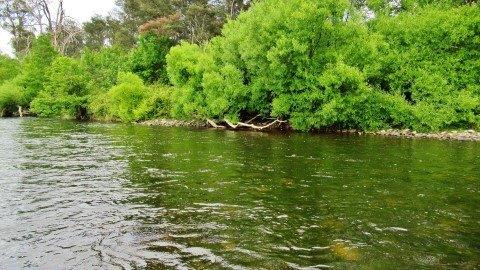 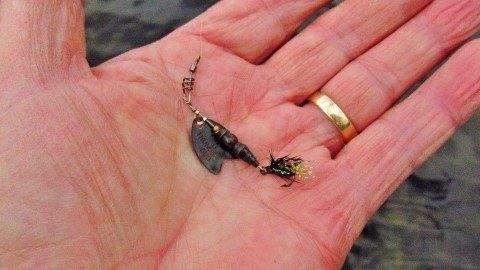 The ever reliable Stone Fly Bugspinner