With the lower back and hips not feeling all that good this morning I thought I'd have a break from river fishing for a few days to give the body time to recover from a couple of tough river trips two days ago. Then seeing how good the weather was and with some windy conditions forecast again I decided not to rest up but to go a chase a few trout in the upper Mersey River again.

After placing eight heat pads on the lower back & hips and taking a few pain killers I was on my way, this trip wasn't in the same area where I caught ten trout from eighteen hook ups a few days ago, it was further downstream from there.

The weather this morning was absolutely beautiful, probably the best day for some time with no wind, clear skies, it couldn't have been better. It was around 7:05 am when I hit the dead flat glassy crystal clear waters on the Mersey, the first thing I noticed was trout surface feeding on small Mayfly duns and midges.

On seeing that as well as hundreds of them hovering above the water I knew it was going to be a tough spin session. Surface feeding trout on flat clam water is always tough for the spin fisher and can also be tough for the fly fisher as well if they don't select the fly to match the hatch. Looking back downstream with the sun hitting the water one could see thousands of these small insects on the water surface and the air, something I haven't seen on the Mersey since before the June 2016 record floods.

As much as I hated seeing so many insects mainly because it was the making for a very tough spin session I was also quite happy to see such a large hatching of insects again, there's life back in the river system. I knew I was in for a challenge, it's just a matter of luring the odd greedy trout in, one that's interested in taking something else apart from the May fly duns & midges. The Mayfly has a short life span, after eggs are laid in the water after mating nymphs hatch after two weeks and live in the water for twelve months.

During their twelve months in the water they develop into what they call a Emerger, once at the surface they then turn into a dun, fly off & mate. Soon after mating they lay their eggs in the water and die, the attached sketch will give you a better idea of their life cycle. Hundreds of them are eaten by the surface feeding trout no sooner they touch the water surface and never get to lay their eggs.

With millions of mayfly's on the water surface there are still many millions of eggs laid any way. Right, now let's get back to the trout fishing and how it all panned out.. I started the spin session fishing a long wide glassy stretch of river flicking the Aglia Furia around for a few minutes to start with before deciding to go with a #0 Stone Fly Bug spinner.

It's a lure that's sucked a trout or two in when there's been large insect hatches on this river over many years when the trout have been surface feeding. I kept casting the spinner well ahead of the feeding trout and retrieved it down past them, this certainly drew the attention of several fish as bow waves appeared behind the lure as it was retrieved.

Only problem was there were no takers, just followers which was what I was sort of expecting anyway. With the trout following the Stone Fly spinner I still felt confident the odd one would eventually have a crack at it, it was just a matter of being patient and having confidence in the Stone Fly spinner. The trout that had followed the spinner where various sizes from small to large fish, at this stage I didn't care what size fish would take the spinner, any size would suffice.

A long cast up and across the river to where I saw another trout surface feeding resulted in a large bow wave appear behind the lure as I retrieved it, this fish was moving in much faster than any of the others had done so far. Once the trout was right up behind the spinner I gave the rod a light twitch, that was enough to get it to take the Stone Fly spinner.

It was a larger fish than I had anticipated too, and boy did it give me the run around by making several leaps from the river and running both up and down the river before I finally had it under control and close enough to slip the net under it. Once in the landing net out popped the Stone Fly spinner, the fishing Gods were on my side this morning.

You know, it doesn't matter how many times one's been trout fishing or how many fish one's caught, there's always that feeling of satisfaction when you get a fish to take the lure when the going is tough. Catching that solid brown trout was one of those moments, it was also a beautiful 705 gram fish which made it even more satisfying. It seemed like it had taken ages to catch the first trout of the morning until I looked at my watch only to see it was 7:16am, eleven minutes that all it had taken.

Every cast and retrieve was attracting the attention of the trout but not all of them where aggressive, I did have four hits & I was lucky enough to catch and release two more medium size browns by 8:05 am. With three trout caught and released I was fairly satisfied with how it had gone so far this morning especially seeing as I hadn't reached and fished the fast water runs at that stage. The fast water runs is where I thought I'd add quite a few trout to the days tally.

The following two hundred meters of slow flowing water gave up follow after follow without a single hit. I tried a variety of Mepps spinners and even succumbed to a small hard body lure, still no takers. I was about to call it a day because my lower back was becoming quite sore, I was struggling on the rocky river bottom, each step on a rock that rolled under foot jarred the back sending sharp pains down the back of my legs.

I decided to bypass some fifty meters of the slow water and hit the fast water with the Stone Fly spinner back on the snap swivel. After having a couple of follows that included a hooked and lost fish I went for a change of lure, it was back to the Aglia Furia another of the Mepps lures that does well on the trout even more so in the clear fast water runs.

Three casts up and across the fast water while letting the water do the work with the drifting spinner a small/medium size rainbow trout took it. It had taken an hour to catch my forth trout of the morning. Looking at the fast water ahead of me that I felt would be holding a few trout so as sore as I was feeling I pushed on. After having a couple of follows and no takers with the Furia I went back to the Stone Fly Bug spinner and soon picked up a small brown from two hook ups.

A little further up stream I lost a medium size brown, ten minutes later I caught and released the fifth brown trout of the day. The pain in the lower back was getting unbearable so thought it best to call it a day and make the one and a half kilometre walk back to the car. It was the longest one and a half kilometres I think I've ever walked in all my years of trout fishing..As sore as I was it was still a great day to be in a river chasing trout.

** PS: Since writing this report I have spent four days in bed and had over forty injections in my lower back with more to come over the next three weeks. It's something I have to put up with and it won't stop me from fishing the rivers here in Tasmania yet, I'm not ready to chuck in the towel. May just have to spread the river trips out a little further apart. 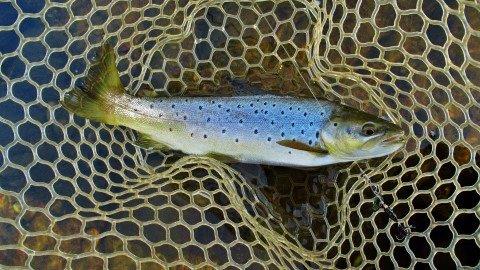 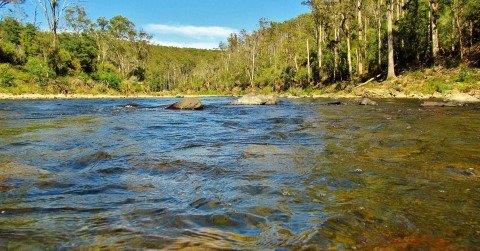 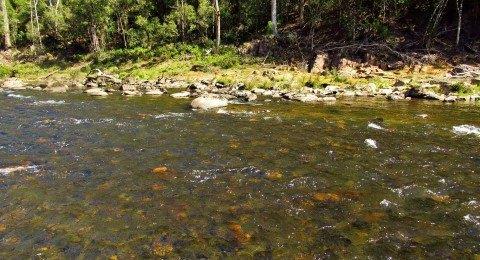 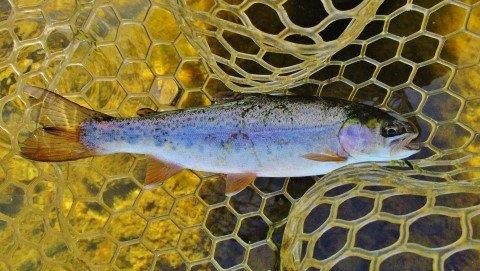 The only rainbow trout caught 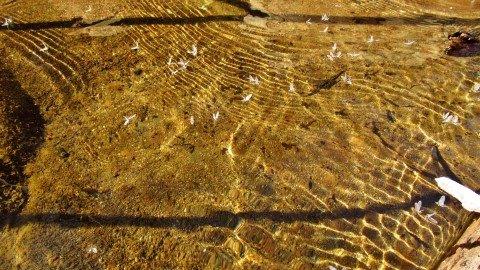 These Mayfly duns have laid their eggs and are now dying