Browns Get Revenge Again on the Meanader River

Browns Get Revenge Again on the Meanader River

After having an hour of acupuncture this afternoon I was off to the Meander River for another (4.00pm) afternoon session. The last trip here the brown trout really won out by tossing the hooks more times than I can remember ever happening during a session. I don't normally lose more than I catch, but that trip (20-11-14) I did when I hooked and lost ten in a row before spitting the dummy and headed for home.

This trip I started off a lot further upstream where it is mainly all fast water and an area that usually fishes well. It is a very tough stretch of river to fish though as it's just full rocks that are all shapes and sizes, and if they're covered in slime, well it makes that much tougher on the body.

Once there I found the river level to be a little lower than the last trip, but still ideal for wading. The water was clear and really cool which was perfect, so I started of using a #00 black fury (black blade) and after some six or seven casts had my first brown on. This was a nice solid fish too that made several leaps from the river trying to toss the little spinner. Well, it won out as it did eventually toss the spinner much to my disgust. Oh, and the rocky river bottom was also covered in a layer of slime that was going to make wading that much harder too. So this wasn't the start I wanted as I always like to land the first fish hooked for the day.

I slowly and carefully worked my way upstream and managed three more hookups and bugger me as these browns all tossed the spinner when they leapt from the river. A quick rub over the treble hook with a small sharpening stone just to put the edge back on it and I was back into it. The fast water had so many great pockets to flick the little black fury into and these all produced hookups, but they kept on winning by continuing to toss the spinner. I had now lost nine browns in a row and was not a happy chappy I can tell you.

I changed to another identical black fury spinner, one that had been used quite a few times before just like the one I had been using from the start of the session today. Well, second cast and I had a hook up and this fish stayed on and finally I had my first brown in the net. It was only a small (260gm) brown, but it was landed and that's all that mattered to me as I had a score on the board at last. Full of confidence once again I continued slowly working my way up the Meander and managed to catch and release another four browns in a row. Now this was more like it, but that's where it ended as the browns turned the tables back in their favour once again. As I fished my way upstream I did hook another six browns and lost every one of them as well.

It was now 7.20pm and I was ticked of and tired of not only hooking and losing fifteen browns I was also buggered from slipping and sliding on the river bottom. That's when I called it a day and headed on back to the "'Trout Stalker 2''some 2 kms away. So in two trips to the Meander River the browns have come out on top by tossing lures 25 times from 36 hookups something I'm really not happy with and used to. Hopefully the next trip I will turn the tables on them!!
Cheers
Adrian 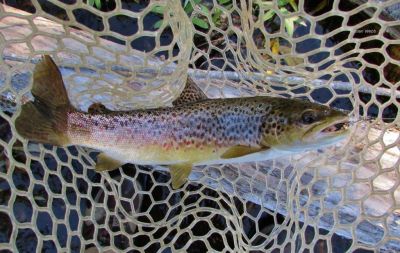 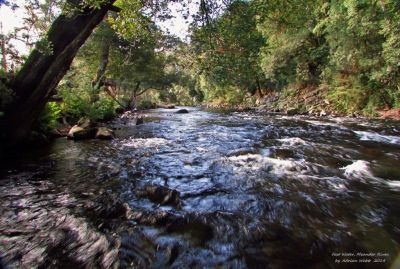