Another overcast and windless morning saw me in the Meander River by 7:20 am when I started casting the Mepps Aglia Furia up & across the river. Using the cast & drift method it was on the second cast that I had a follow from a medium size brown. Even though it didn't take the s[inner it was a good sign seeing a trout so early into the spin session. The river height was running at 62 cms which was fine for where I was fishing at this stage, though I would have preferred it to have been five to ten centimetres lower.

I was ten minutes into the spin session when I had my first hook up, it was only a small brown but it was a start. I soon had it in hand, unhooked & released back into the river. Another cast next up & across the river I had my second trout on, like the previous one it was just a small 280 gram fish. Two trout in two minutes, it was a great start to the mornings fishing. Then just before 8:00am I had another brown take the Furia, this was a better fish than the other two. Three trout already caught & released in such a short time in a river that hasn't been fishing all that well. These trout were all taken in medium flowing water too which surprised me as I thought the fast water would have been the go today. With just thirty meters of river left to fish before I was hopping out and heading to another area I picked up my forth trout at 8:10 am.

With four trout already on the scorecard it was one of my best starts in the Meander River since last season.. It was back to the car and off to another stretch of river, one that's always been my favourite on this river until this season because it hasn't performed at all.. I worked my way upstream and casting the Furia to within a few inches of the river bank, then slowly retrieving it while letting it drift with the flow, I didn't have a single follow. I kept this up for over three hundred meters of river without a sign of a trout. Even with the caddis moths hovering above the water while others touched the surface, there was not a sign of a fish.

It was time to get out and head to another spot further upstream, another area that hasn't been all too flash so far this season. But where do you go when your favourite river is not fishing all that good, you just have to keep trying and hope it will soon turn around for the better.. With hardly any breeze in the area there were hundreds of caddis moths on both sides of the river, not a sign of a trout on the rise. It was going to be another tough couple of hours fishing here too. I was staying with the Aglia Furia because if there were any trout here I'm sure to get a follow from one while using that lure. It wasn't until I had fished around fifty meters of river when I did a right handed backhand cast around a fallen tree and lobbed the spinner within four inches of the river bank.

No sooner had I started retrieving the lure when a good size brown moved out of the shadows and didn't hesitate to take the Furia. It was a beautiful solid fish that fought like hell for a several minutes before I had it in close enough to slip the net under it. That fish went 460 grams, a couple of photos it was returned to the river.. That was the last fish seen for well over the next three hundred meters of river when I picked up my sixth trout of the morning, it was taken in a fast water run. I drew the fish out of a flat water close to the opposite river bank, it followed the spinner that I drifted with the flow. That trout sat right up behind the lure until it had reached the middle of the river, that's when I gave the rod a light twitch which makes the spinner blade flutter and that's when the trout took it.

It was a lovely fish but not as big as the previous brown, this one went 370 grams.. That fish was caught at 10:45am, I fished another two hundred meter stretch of medium to fast flowing water without a single follow, that's when I called it a day.. With only two more trout caught & released after such a great start to the day it wasn't the ending I wanted at all. It was another disappointing four hours spent in the Meander River again today, a ninety kilometre round trip for just six trout isn't good enough in my book. I'll still come back here again, when that will be who knows. Then knowing me and how much I love fishing this river it won't be all that far off.. 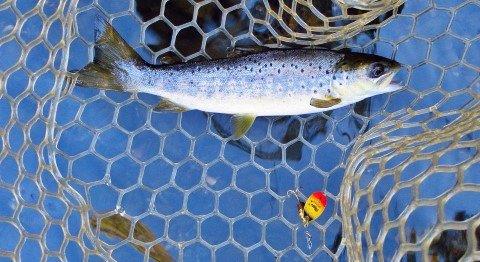 First brown of the morning 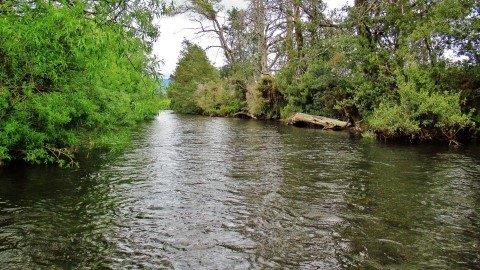 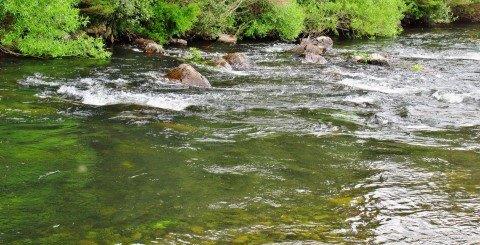 Plenty of flow in the river 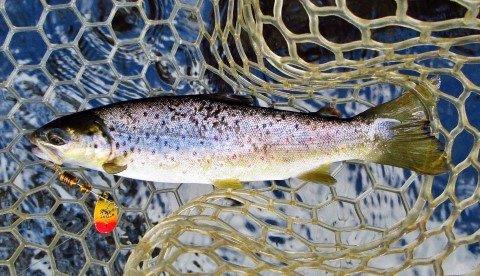 Second trout of the session

The last trout of the session was caught here 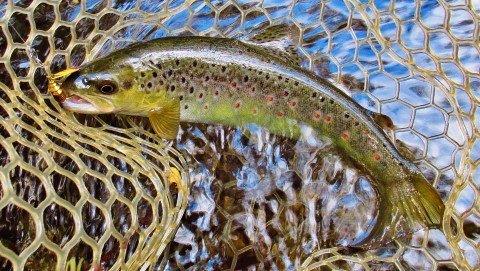 Trout No 4 a well conditioned brown