I headed off to the Meander River to catch trout number 500 today, something I thought would come nice and quick in the river. Thing is I was pretty slack in getting up to start with and I wasn't in the river until 9:30am after a 1.5 km walk, the sun was well up and full on the clear water. Still feeling confident that my favourite river would give up the fish required I was quick in starting the session of with a Mepps Aglia Furia in a nice free flowing medium stretch of river. Twenty minutes later I still hadn't seen a fish, no follows, just nothing, there wasn't a fish in that beautiful stretch of water. I tried a variety of spinners & even hard body lures, still nothing. I continued spin fishing my way upstream giving the Okuma Helios SX20 reel & Okuma Celilo 6'6'' ULS 1-3kg trout rod a good workout all to no avail, still no signs of any trout. It wasn't until 10:30am when I drew a nice brown out of a shaded area on the left hand side of the river, that trout was only half interested before it turned and moved off. Seeing that trout did give me some hope of catching one here today after all.

I kept moving on upstream working the river in a 180 degree arc using a variety of lures again, all I could manage was one follow from a small brown that sat around meter or so off the back of the lure. Fishing in full sun & clear water, was that the reason for the lack of trout. I doubt it, the trout just weren't in this area today. Perhaps I should have fished the fast water runs well upstream that I had originally planned to do the night before. With my lower back & hips not being all that flash this morning I didn't want to make them any worse, it's just not worth it with the time that's left in the trout season. I fished on until 11:30 am before deciding to get out and head elsewhere. I was still thinking about the fast water runs and knew that it's the area I would catch the trout I needed, once again I said no. On the walk back to the car I was going through quite a few ideas of what areas of the Meander River I'd head off to. I had three in mind, one I ruled out as it would also be in full sun, the other two required a bit of hard bush bashing to get to and I wasn't really feeling up to that after having a kilometre walk back to the car. Then it hit me, try a small creek that's on my way home, it should have a decent flow of cold water flowing in it, water that comes down from the highlands.

So that's what I did and on my arrival I was right, there was a nice flow of cold water in it. It was just on 11:40am by the time I hopped into the creek and had a hit and miss on the very first cast using the #00 gold Aglia spinner. This was just what I was hoping for, a hit from a trout first up, after that I had quite a few follows and light taps on the spinner but they weren't real aggressive fish.. I decided I would have to go for a small floating hard body lure if I was going to get hold of a trout or two, just the one trout would do for now any way. I was now very confident that it was only a matter of time before I'd have a trout hooked and landed. I worked the first couple of wide slow flowing runs and had a few follows from some very skittish trout, they're here but still no signs of aggression yet. It wasn't until I moved into a deeper narrow stretch of water when I had my first hook up of the day. At last it was fish on and a nice medium size brown trout it was too. I had my 500th trout of the 2018/19 season in the net, it was a clean well conditioned 320 gram brown. I was stoked that I had finally reached the mark set once I realized I wasn't going to reach 600 for the season.

Every fish I catch now is an added bonus to my seasons tally. Six minutes later I had my second brown on for the day, today's trout drought was broken at last, nine minutes after releasing the second brown I had my third one in the net. Three trout in fifteen minutes couldn't have been better, even then those trout weren't all that aggressive. They were coming up behind the small hard body lure and lightly nipping at the tail end of the lure. What I had to do was as they came up behind the lure I stopped the retrieve & gave the floating lure a very light twitch, that's when they grabbed it and I set the hooks. I missed another three trout before deciding to call it a day, I had achieved what I set out to do today and was quite happy to head back to the car. On the walk back I put the little gold Aglia back on as that's the lure I'll probably start off with on my next trip to a river. I was almost back at the car when I noticed a small circle appear in a little backwater, so I flicked the little gold Aglia into it, no sooner had I started to retrieve it a bow wave appeared behind the Aglia spinner. The lure was quickly taken, I had my forth trout hooked & landed. It was another medium size trout and a good ending to a day that started off so poorly, a day I won't forget for a while. 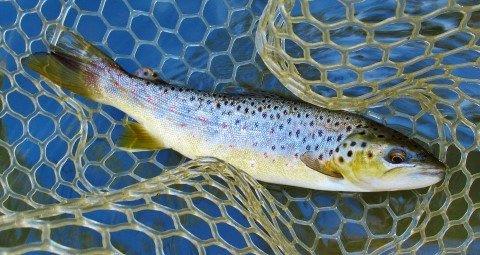 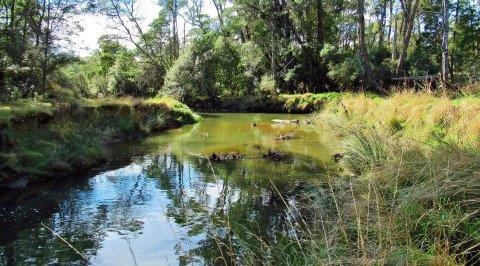 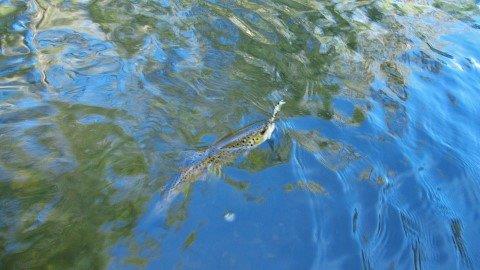 This brown fell to the ghost brown lure

Trout No 500 for the season