The Bug gets the first trout for 2020

Seeing as it's a new year and I haven't wet a line since the 24th December I thought it was time to go and have a session in a river this morning. I left home at first light and on the way I saw a fiery sunrise, one that was bright orange due to the air being filled with smoke from bush fires here in Tasmania as well as the mainland bush fires.

Here I was heading off chasing trout in a river when there are people battling to save homes as well as their lives, it really makes one think how lucky many of us are. My thoughts go out to all of those people as well as the volunteers who have and are still being effected by those horrific bush fires around Australia. I arrived at the Meander River just before 6:30am in what was a beautiful cool morning, the river was running clear and at an ideal wading height, all I needed was the trout to be here and in an aggressive mood.

It wasn't that long before I was in the river flicking a Mepps #1 Aglia Furia around with the 6'6'' Okuma Celilo Finesse ULS 1-3kg trout rod that was paired up with a Okuma Helios SX20 spinning reel filled with Platypus Super 100 clear mono line. I love this outfit for spin fishing the larger rivers such as the Meander, Mersey & Leven Rivers, it's such a perfectly balanced light weight outfit that one can fish with hour after hour in any river. After close on thirty minutes without having a strike let alone seeing a trout I realized I was fishing a stretch of river that's been heavily fished over the past six or seven weeks.

Each time I've driven past this area there's always been someone in this stretch of river, on top of that it was one of the beats used in the World Fly Fishing Championships, it was fished for five days in a row. Another thing, the access here is easy and being the holiday period now this river will be fished on a regular basis for several more weeks. I did think about turning around and heading back to the car then thought twice about it so I continued to fish my way up the river. It wasn't until I had reached the top end of this stretch of river when I hooked and lost three small browns in a row, something that didn't go down all that well.

I came to a stretch of water that was way to deep to wade so it meant getting out and doing a little bush bashing to reach another fishable long stretch of river. No sooner had I cast the Aglia Furia to the left side of the river and started to retrieve it a bow wave appeared behind the blade spinner and that's as far as it went. No signs of aggression from that trout at all, it had sat a few inches behind the lure and followed it mainly out of interest. It was then I went for a change of lure, this time it was on with a Mepps #0 Stone Fly Bug spinner, a lure that's done the job in this river previously.

I was in waist deep water casting up and across the medium flowing river where I had a couple of follows, the second one that followed the spinner did have a light whack at the spinner and that's as far as it went. It wasn't until I was half way up this stretch of river when I had a long cast up and across the river and lobbed the Bug spinner close to the left hand river bank when the first trout of the day was well and truly hooked. It wasn't one of my better trout for the season but it was the first this year, a nice well conditioned 335 gram brown. It had taken one hour forty minutes to catch the first trout, way too long for my liking.

That was the one and only trout seen until I reached the head water (25 minutes later) of this long stretch of water, a cast and retrieve up and across the head water was all it took for a small brown to take the lure. With some good looking trout water ahead of me I continued to fish on for as long as I thought was worthwhile. It was 9:10am when I finally gave up the chase for trout in this area, a lot of extra time had been wasted fishing on for just the one follow. After a short bit of bush bashing my way back to the road and a fifteen minute walk to the car, a short drive up the dirt road to another favourite stretch of river I was back to the fishing by 9:35am. It only took a few casts close to the right hand river bank that drew the attention of a small/medium size brown, like early on that's as far as it went.

I thought by using a small 40mm hard body lure may work on the trout seeing as they're not all that aggressive towards the blade spinners this morning. I used a couple of different designs and coloured hard body lures without even attracting a trout so it was back to the Mepps blade spinners. A copper Aglia Mouche Noire worked well in this stretch of water some time back so that's what I went for, even that little lure couldn't attract a trout, it was back to the #0 Stone Fly Bug spinner. Seeing as this long stretch is mainly all fast water it was also perfect for the cast and drift method and I could fish it from one side (left) of the river for the whole length of it. So that's what I did for the whole stretch of this fast water, cast and drift and like always it worked beautifully catching five trout, another was caught with a cast & retrieve directly upstream.

Following that I did have a couple hit and misses and one hooked and lost trout before calling it a day at 11:30am. This trip did turn out better than I thought it would with eight trout caught & released from a dozen hook ups. Before writing up this report I checked my records from last season (2018/19) to find I had 38 trips for 306 trout caught, this season (2019/20) I've had 34 trips for just 228 trout caught, well down in the catch rate. Just goes to show that the rivers here in Tasmania aren't fishing all that well this season, not only that the trout are mainly all small to medium size fish. Only six of the trout I've caught this season to date have been over the 500 gram mark with the best fish going 705 grams. Last season wasn't much better for the same period either with nine trout over the 500 gram mark, one being 1.4kgs and one at 710 grams. 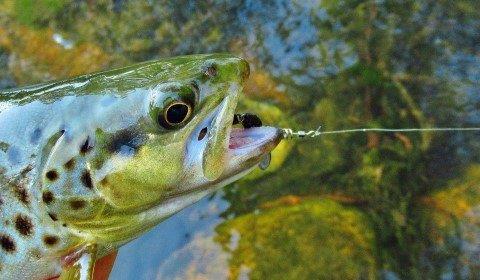 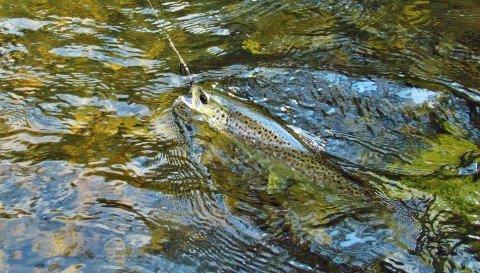 Another brown falls to the Bug spinner 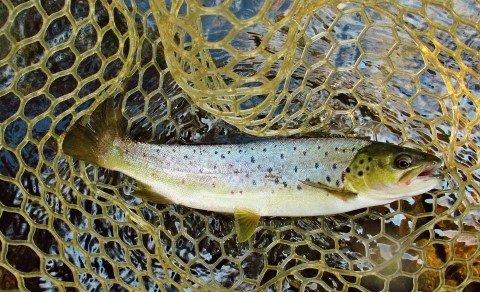 Best trout of the day 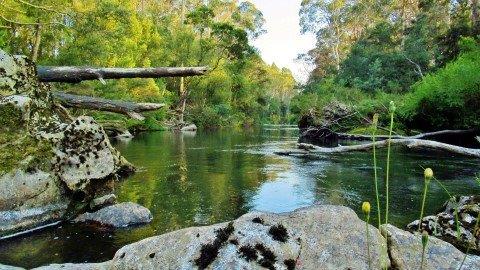 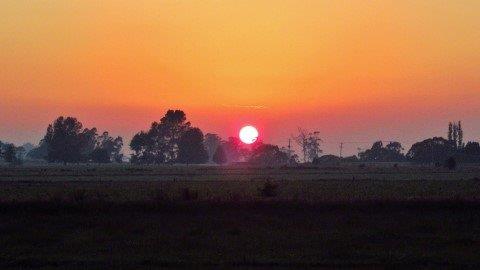 Fiery sunrise on the way to the river