Finally the weather arrived that I've been wanting for quite some time now, a day with light drizzle and very humid conditions were here at last. Even though I was up at 5:00 am I was a little slow of the mark before heading off to the Meander River. By the time I put a dozen heat patches on the old body & loosened up it was 6:10 am when I was in the '' Trout Stalker 2 '' and on my way to the river.

Today my plan was to head to the fast water runs, one of the toughest stretches of water one can fish in the upper reaches of the river. It's a very long rocky fast water that tests the best of any river fisher, a fast water full of very slippery rocks/boulders that has sent many trout fisho's home much earlier than they would have liked. As tough as it is on the body the upper Meander River fast water is at the top of my favorites list to chase brown trout. I was in the river by 7:05 am and found it was running a little higher than I preferred, this meant it was going to be that much harder work fishing my way upstream.

When it's running hard and fast the trout will be sticking close to the river banks in what flat water they can find, even the smallest shallow ones will hold trout. My biggest problem today will be when I have to cross from one side of the river to the other (at least 4 times) due to it being to deep in certain areas. Thankfully I know where the deep areas are and where it safe to cross over, that's when knowing a river like the back of your hand comes into it. If I didn't know this river as well as I do I would not have fished here today, always remember “Safety First” when river fishing whether it be for trout or any species of fish. This morning I started off using a brand new Mepps #00 (1.5 gm) gold Aglia spinner, one that I placed a black fury sticker on just to take a little brightness off the face of the spinner blade.

The fast water is perfect for cast and drifting the spinners especially if you lob the lure in a flat water on the opposite side of the river. The trout will come out of the flat water and chase down the spinner as it drifts with the fast flow, the main thing one has to do is keep the line tight while slowly retrieving the spinner. A lot of the time the trout will pounce on the spinner no sooner it hits the flat water. It took twenty minutes before I had my first take on the little gold Aglia, that was from a direct cast upstream into a small flat water next to the river bank. No sooner had the trout taken the lure it headed straight into the fast water in the hope of tossing the spinner, that didn't work because it was well hooked and I had control of the trout.

It made several solid runs and leaps from the river before I eased it back into a flat water near the river bank then slipped the net under it. It only took a couple of minutes to land it, take a photo then release it back into the river, that fish went 445 grams, a nice way to start off the spin session. After that I hooked and lost a couple of trout that I had lured from a flat water on the opposite side of the river using the cast and drift method. Then at 7:50 am I picked up my second trout of the morning, that one was taken from the opposite side of the river below the cattle bridge. I had to stay close to the left river bank as I moved into a medium flowing deeper stretch of water, it was here with a direct cast ahead of me when I had the small brown trout snap up the gold Aglia, two casts later I hooked and lost a small rainbow trout next the cattle bridge.

After making my way past the bridge I had to cross to the other side of the river before slowly working my way upstream, crossing over wasn't all that easy but I made it to the other side without falling in. One thing to remember is when crossing a fast water run always face upstream and slowly side step your way up across it, making sure you have good footing on the river bottom before taking the next step. If you face the opposite river bank and try crossing a stretch fast water, as you step forward the force of the water will push your leg downstream, this will spin you around and before you know it you will be on your way downstream. It's even harder in a very rocky river such as this one I'm fishing today, if you're unsure of crossing over then don't attempt it, get out and walk to another entry point that's safe.

Any way, after fishing my way upstream for another forty minutes & hooking and losing three more trout in a row I had to cross the river again. This time it was much harder because the water was a few of inches deeper here which put a lot more force on the legs, it was a very slow river crossing that took close on eight minutes. After reaching the opposite side of the river it took a little while before I the forth trout was hooked and in hand, it was a 270 gram small brown, another that was taken with a direct cast straight ahead of me into a shallow flat water. After the released of that little brown I went on to catch and release four trout in fifteen minutes, three were taken off the opposite river bank with the cast and drift method like before, the other with another direct cast upstream. I had a quiet patch for the following ten minutes I hooking and losing two trout as well as having a few hit and misses.

Suddenly the trout were on again, from 9:15 through to 10:35 am I caught and released another eleven trout from thirteen hook ups, all of those trout were taken the same little gold Aglia spinner I started with. Most of the trout were taken using the cast & drift a method that was working a treat today in the fast water, the fishing had turned out better that expected. Several times I was calling it a day, the further I fished my way upstream the tougher the going was becoming, I couldn't quit while the trout were still on the take.

Continuing on with the fishing was worth it, I caught a solid 720 gram brown (best fish of the day) that was taken in a small shallow flat water a few meters ahead of me. Once again I thought of calling it a day but fished on little longer catching a few more trout to end the session (11:15am) with twenty six trout from thirty five hook ups, I couldn't push myself to fish on any further. It was my best spin session so far this season, the fast water and weather conditions were perfect as was the trout fishing throughout the whole four hours & ten minutes spent in the river. One thing I forgot to mention was one small brown trout that I caught & released had a small gold beaded trout fly in it's top jaw too, a modern day trout with a pierced nose stud. Season total catch has now reached 254 trout (37 trips) compared to 317 trout (40 trips) for the same time last season. 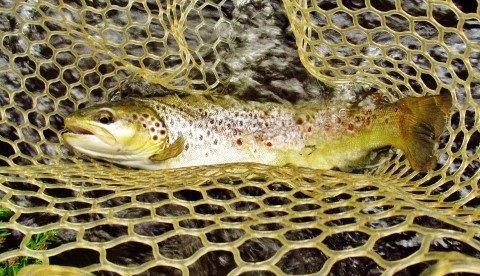 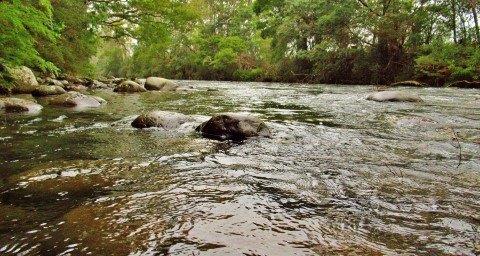 Plenty of water coming down the Meander 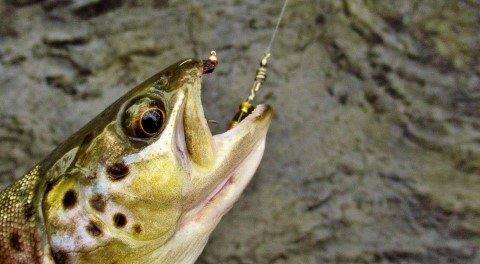 Small trout with a beaded trout fly in its top jaw 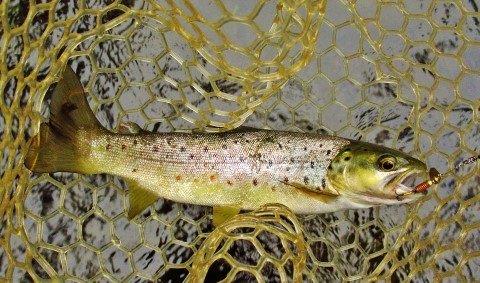 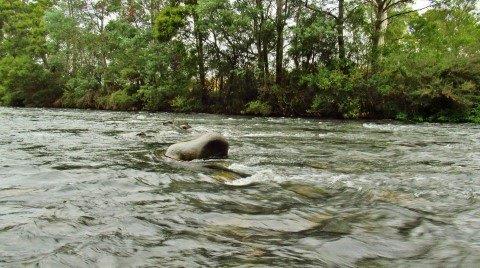 The river running a little higher than I wanted