The weather today was supposed to be fine and windy with rain due later in the day, well it was 2:00pm and the sky was still clear, there was hardly any wind blowing so I headed off for a spin session. This trip was to the upper reaches of the Meander River to fish the fast water, a long stretch of water that holds quite a few trout at this time of the year. It was 3:40 PM when I hit the river that was running clear and in full sun which didn't bother me all that much, as the day goes on it will be shaded by the trees and foliage that line both sides of the river.

I thought I'd give the little #00 gold Aglia a go for starters to see if it would get the attention of a trout, it did and the trout just followed it. That trout didn't strike the lure due to it being a little too shiny in the clear water. My aim was to draw the attention of a trout then change to a darker coloured lured, it's something I try out every now and then. The lure I had ready to use was the #00 Stone Fly Bug spinner, with it's wide blade blade with yellow thin vein lines on it, this lure will get a few trout in the sun filled clear water.

This fast water I'm fishing is perfect for casting and drifting, that's what I did as I slowly fished my way up stream, it took twelve minutes to catch the first trout of the afternoon. I continued casting and drifting the spinner in the fast water and lost four trout in a row before catching two more from three hook ups in a deep fast run near the cattle bridge, three trout caught & released from eight hook ups (in 40 mins) wasn't good enough. Like I keep saying, this is always a part of fast water spin fishing, hooking and losing trout always happens, some days you'll catch more than you lose, other days it the reverse like it is now.

In the fast water trout see something go past them, instinct tells them it's food and they chase it then grab at it in the fast water, they're either well hooked in the jaw/mouth and stay on or they're just lipped and toss the lure. With all the turbulence in the fast water they can't make out what it is and just attack it, that's why I love fishing the faster waters than the slow flowing runs where they can be very fussy testing one's patience. The good thing today is they're here and quite aggressive, even with full sun on the clear water.

Another good spot to lob the spinner into is the the flat waters close to the river banks when fishing fast waters, trout will hold out in them and pounce on what ever goes by. Any way back to how the fishing went on the day, I was now into the fast waters above the bridge, a very long stretch of fast water that can hold plenty of trout on a good day. It was a little on the slow side to start with hooking and losing one trout over the first fifty meters of river, the slippery rocky bottom here was also tough, much tougher than below the bridge. It was 4:55pm when I hooked into a fish from a flat water on the left side of the river, that fish took off downstream in one hell of a rush, it really ran hard and fast.

I lost count of the leaps it made from the river and how many times it ran from one side of the river to the other, it fought like a two kilo trout. I knew it wasn't anywhere near that size and that's what I love about fast water trout fishing, size doesn't mean a thing, all trout what ever size they are fight hard and dirty. This fish soon tired and I slipped the net under it, it was a nice well conditioned 380 gram brown, not long after that I picked up a smaller brown. After it's release & a little further up the river I hooked and lost what would have been the trout of the day (700-800gms) on the stone fly spinner, the hook that was holding the trout broke off as it leaped from the river. I replaced the Stone Fly with a #1 March Brown Bug spinner feeling quite confident that it would pick up a few trout in this fast water.

Another cast back into the same piece of fast water where I had just lost that large brown the March Brown was snapped up by a trout, this one was much smaller and the sixth trout of the afternoon. From here on the trout where caught in ten minute (give or take a minute) intervals with the odd one being dropped from time to time. With a plenty of shade on the river now due to the sun being lower in the West I gave a #00 gold Aglia Mouche Noire a go, that little lure picked up a trout before from two takes before I went back to the March Brown.

The ninth trout that was landed was the best trout of the session a solid well conditioned 515 gram brown, soon after that (6:35pm) and a few trout later I picked up a beautifully coloured 355 gram rainbow trout. I was starting to feel the pinch of the fast water fishing now, I was getting a little tired & sore from slipping and sliding in the fast water, I did fish on a little longer to catch two more small browns, it was 6:55pm when I called it a day.

The majority of the trout were caught using the cast and drift method, those that weren't using that method were lured from the flat water pockets near the river banks. This trip was one of my best spin sessions for quite some time with fifteen browns & one rainbow trout caught & released from twenty five hook ups. The best spin session was back on the 10th January when I caught & released twenty six trout from thirty five hook ups in this very same stretch of river. Now this is more like the February I know, let's hope it continues on from here, just need a few decent days of rain that's all.. 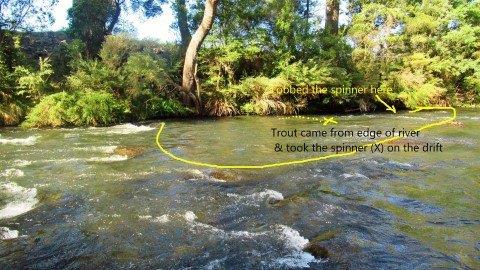 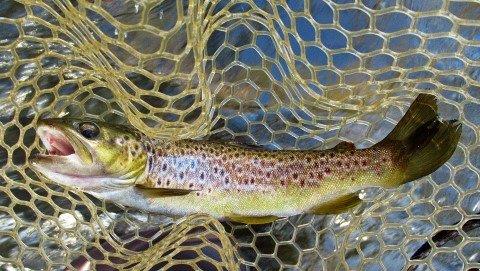 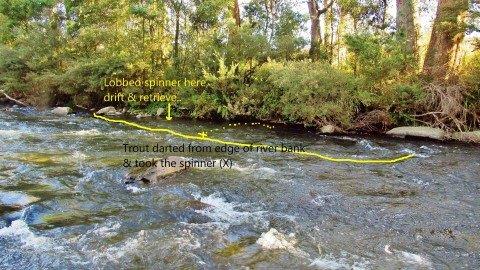 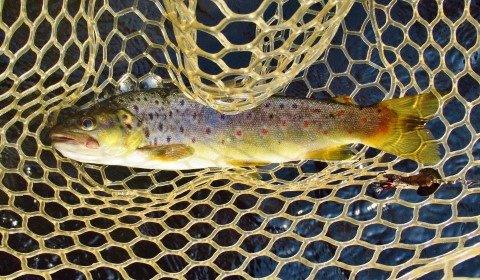 This trout fell to the March Brown Bug spinner 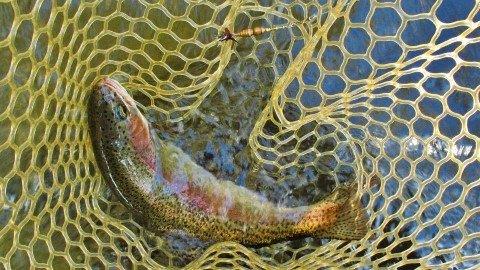 Wild rainbow trout a rare catch in this river