Seeing as I pulled up a little stiff from yesterday's spin session I waited until 2:15 pm before I headed off to have a late afternoon spin in the fast waters of the Meander River. My last trip to these fast waters wasn't a good one, all I managed that day was seeing two trout follow the lure and that was it. The water level is down to 57cms which is ideal for wading the fast waters I'm heading to. It was 2:55 pm by the time I entered the river and it looked great, the only thing I had to contend with was the rocky river bottom, the rocks were a little slippery under foot. I started the session off with a #0 March Brown Bug and it wasn't all that long when I had a trout have a go at it, it missed getting hooked. Still, that was a good sign and I felt like I could be in for a good time fishing the fast waters this afternoon. I was concentrating on casting the spinner into the flat waters along the opposite side of the river, they're the areas that the trout will be holding out waiting to grab anything that passes by. It wasn't all that long after seeing the first trout when another fish followed the March Brown for several meters before it turned and moved off.

When then happened I made a lure change, it was on with a Stone Fly Bug spinner, with the water being crystal clear I thought the black coloured may be more attractive to a trout. It wasn't, after five minutes of using the Stone Fly and not seeing a trout I went for another change of lure, this time it was a plain Black #0 Aglia spinner that I chose. The Aglia spinner wasn't the normal Mepps lure you would see in a tackle store, this one had a couple of additions added to the black spinner blade. Sometime ago I added a small silver sticker to the blade to see how it would go on the trout in dark and cloudy waters, it didn't do any good the day I tried it so I placed a small Mepps Black Fury sticker on the blade. Today was the first time I tried it out in a river, after having a couple of casts up and across the river and letting it drift with the flow nothing happened, there wasn't a sign of a trout. The next cast was into a flat water that was several meters ahead of me, no sooner had I started to retrieve the spinner it was taken hard and fast by a trout, it was a solid fish too and it played hard to get in the fast flowing water. Finally it tired and I slipped the net under it, the first trout of the session was in the net, no sooner was it in the net, out popped the lure. The trout itself was a beautiful solid fish and a good one to start the session off with. After it's release I had another trout follow the lure for a short time before it moved off so I went back to the March Brown Bug again, same thing happened as it did with the Aglia spinner.

I was about to move into a deeper fast flowing stretch of water so I made the decision to go for the same 50mm hardbody lure I used three days ago in this river. That day it was the only lure that the trout fell to, I caught and released seven nice trout so why not try this lure in the fast waters to see how it goes. The choice of changing to this cheap unbranded rainbow trout pattern was a good one as it only took a few casts and retrieves when it was fish on. A beautiful brown trout moved out of the shallow water on the opposite side of the river and smashed the lure. This was a larger fish than the previous trout too and it played merry hell in the deeper fast flowing water making several runs then thrashing about on the surface until I managed to bring it into the net. The same thing happened as it did with the last trout once it was in the net, out popped the lure, lady luck was certainly helping me out today. I weighed the trout while it was still in the net, after deducting 310 grams net weight the trout was a nice 685 gram fish that would take some beating this afternoon. That was the only trout caught while fishing that deeper run and it wasn't until I moved into the shallower fast waters when I hooked and lost two trout in a row.

While fishing the next shallow fast water the lure was bouncing off several large rocks that were in it, not long after that I felt that the lure was working all that well, on checking the lure I found that the bib was broken. Thankfully I had another identical one in my lure box to replace it, was just a shame to break the bib on a good trout catching lure. I still have another new one at home and two more on order, so I have a few backup lures to fall back on if need be. It wasn't until thirty minutes later when I caught my third trout in another deep fast flowing stretch of water, that fish was also a nice well conditioned trout. From then on I went on to catch three more browns and one small rainbow trout, all of those trout were caught ten minutes apart, I also hooked and lost two more in that time too. I was starting to get sore in the lower back and as much as I would have liked to have kept on fishing I decided not to push my luck so I called it a day at 5:30pm. The biggest disappointment of the day was the fact the trout weren't into taking the Mepps spinners, it's something that rarely happens with my use of them on the trout. As it turned out the cheap hardbody lure saved the day so all wasn't lost at the end of the spin session. 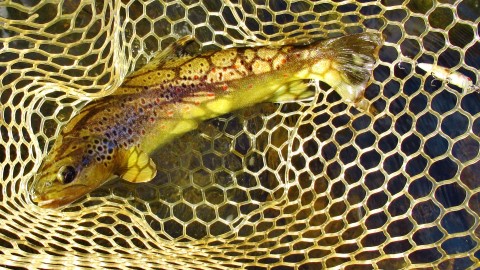 A nice way to start the day 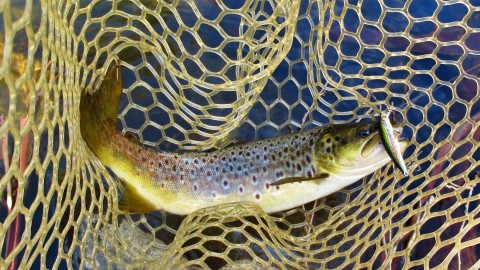 It was a hard body day today 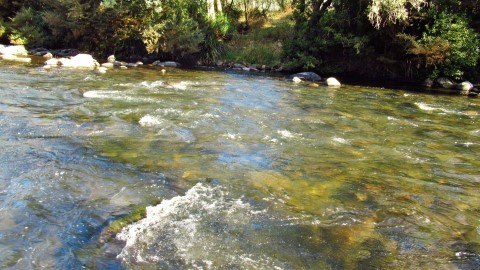 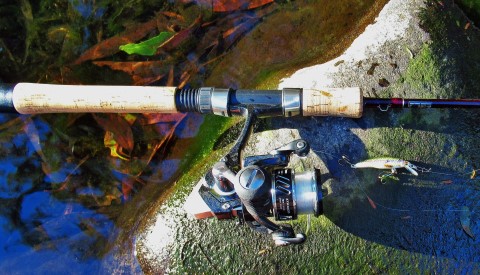 The trout gear that did the job today