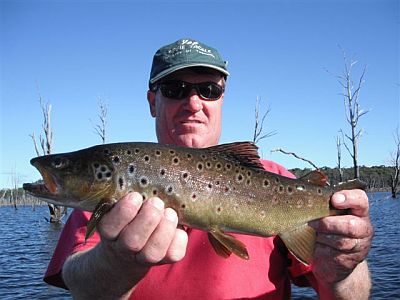 We headed out to Lake King William 27 March, with Dale and Trev Howard, leaving home at 6.30am. On the way, and since we were going past it, we thought we would have a look at Laughing Jack Lagoon as we had never been there before.

There are a couple of pictures of Laughing Jack in this report, the water seemed quite low and its clarity quite muddy.
First impressions? As I say, we only fished it for an hour, managing a nice brown of around 2.5 pounds; I quite liked the look of this water.
They tell me the fish that you catch out of Laughing Jack are some of the nicest tasting around, so I will have to cook mine up and test that theory for myself. I envisage someone trolling lures here would do quite well on occasions, and we did see the odd fish rise.
Not a lot of opinion can really be forwarded, when you have spent just a short while on it like we did though.

Lake King William
This place seems to be the flavour of the month following a couple of President Phil Zanetto’s reports.
I know, speaking for myself and least, it fired interest up on this water and yesterday, although we had to work hard early, it produced yet again.
We caught fish on most methods, fly, soft plastics, with Dales Yep hard bodies seeming to the lure of choice as every second cast either had a grab, a follow or a hook up.
This water is absolutely insane!
There is a lot of small fish in there, but if you wade through them, there are also a lot of decent ones, as you can see from the photos!
Dale had “one horse of a fish” follow his lure right to the boat, and it tied itself in knots snapping at his lure, but sadly it missed time and time again and eventually slunk back down into the depths.
A lot of our fish were around the 1.5 to 2 pound mark.
Plenty of duns and Jassids on the water along with a huge caddis hatch as we headed in.
In one bay, the water was literally moving with fish.
I was dropped off back at home at around 11pm, it was a long day, but it has to be when you travel a couple of hours “each way” to get there.
I am keen on a Presidents camping trip at King Willy next year; it is indeed a fisherman’s oasis.
One can only imagine how thick the insect hatches must have been in the warmer months.
We were pinching ourselves yesterday, perfect warm weather, surrounded by snowed capped hills, fish rising to insects and literally going off!
It is nearly April isn’t it?
To finish, I know I plug Dales lures a lot, and it is true he is a good mate of mine, but I have to say, his hard body lures are dynamite here compared to everything else we tried on the day, I don’t know the models, nor do I care, the lures you see in the fishes mouth are the lures that caught the fish and you can be sure that I will have them in the boat next visit here, that is a fact!
How many did we actually catch? Around 40 I suppose, hard to tell, we let a lot of small ones go.
We lost around the same amount as well, when they jumped and spat the hooks.
It is rare to witness the exceptional trout fishing that is available at this place, yet you hardly see a boat...
Regards, - President Todd 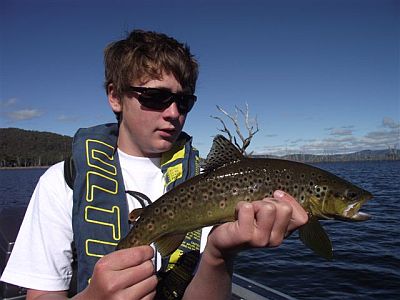