Tassiepaddlers annual get together @ Arthurs Lake

assiepaddlers annual get together @ Arthurs Lake.

Only five hardy (foolhardy?) souls gathered @ Pumphouse Bay campsite on Friday, meeting Simmo who had arrived the day before.
Cold. Windy. Pissing rain and even a heavy, but brief, hailstorm! Noice.
Simmo and Doc were out fishing when I arrived, so during a break between showers (deluges!) I set up camp. They came back just after I'd set up, and we had a coffee. Simmo had a good trout, and we decided it was cold, wet and unpleasant at the camp, wouldn't be much worse on the lake, and a better chance of a fish on the lake than at camp, so we set off.

Did I mention it was cold? At one stage Simmo got his line caught in his rudder. I freed it for him, dunking my hand and forearm into the chill water. My hands were already so bloody cold that the water felt warm! After maybe 20 minutes without a touch I considered a lure change, but realised I couldn't feel my fingers. Chances of tying a decent knot were slim, so I headed back to the ramp with the same unproductive lures I'd been towing.

Loading the "yak was a challenge in itself. The usually simple to use cambuckles prooved almost impossible with my numb hands. With some help from Doc and quiet cursing the kayak was finally secured and I drove the few hundred meters back to camp. More coffee! Legs got up (he'd worked night shift and come straight up after work Friday morning) and then Blackbeard arrived and set up. By now it was about time for dinner and beers.

Dinners were cooked, beers were drunk, coffees were made, fires were stoked (apart from the campsite firepits, Legs had his great portable woodheater). During the evening I found out that my boots were no longer waterproof. Bugger, I didn't have a spare pair. By now my hands were warm, but my feet were wet and cold.

Saturday greeted us with a stiffish southerly breeze and some good gusts. At least it was mostly sunny! Hooray! After some discussion and big breakfasts a plan was hatched. We'd leave a vehicle @ Jonah's Bay ramp and let the wind blow us towards that end of the lake. We launched. We hadn't gone all that far when I was onto my first fish for the trip. A nice brownie came aboard and posed for some pics before being dispatched to my fish bag. Excellent. Wife loves trout, and I was under instructions not to come home empty handed.

After paddling/pedalling/drifting across another bay we entered a shallow stretch where we were sheltered from the wind by an island. The water here was too shallow for either of my lures, so I tied on a 10cm jointed minnow in a trout pattern that only dives a couple of feet. I didn't really expect to get anything on it, but figured that anything that did eat it would be a good size. Soon after felt a need to answer the call of nature and pulled into the shallows near the island.

I hopped out of the "yak in knee deep water between shallower rocks, and there was a large trout holding station on "his" rock only 2-3 meters away from me! There wasn't much water in front of him to cast to, or I'd be in a bush. The cobra wobbler would run too deep. I grabbed the rod with the 10cm minnow and flipped it into the water in front of him. He didn't flinch! I retrieved just fast enough to make the lure swim and as soon he saw it he arced up and turned to chase it. Giving the lure a twitch was all it took and he smashed it no more than 2 meters from my feet! The next 2-3 seconds were the most exciting trout fishing I've ever done, until he threw the hook and swam free. Now I understand what the big deal is with fly fishing and surface lures!

We continued on our way. I was feeling confident now, and I'd hooked fish today on both the lures I was using. We negotiated some more drowned timber and turned around the next point. Now Legs was onto a fish, a pretty decent sized one at that. Another one to the cobra. Legs said he'd decided to change lure and had been winding in pretty fast when the fish hit it. A few minutes later I thought I'd imitate the technique, and had a good fish follow and make a few 1/2 hearted hits, but didn't hook up.

Approaching Jonah Bay the rod with the cobra went off again, and I caught a fish only about 50m from the shore and 100m or so from the ramp! We pulled up and shared snacks of rice crackers, lollies and fruitcake before deciding to fish this area a bit longer. I'm glad we did. Simmo caught more fish, Doc got a little one, and I landed another 4, including a double hookup.

Back @ the ramp I was wrapped. 5 trout in one day! I've had seasons when I didn't catch that many! I cleaned my fish and watched the "yaks while the others went and got their vehicles. We returned to camp where Simmo had made everyone coffees, then we repeated the beer, dinner, and fires / woodheater, but thankfully without the rain.

It was a chilly night. The tent was cold, but the sleeping bag was warm. By about 6:45 my bladder was demanding I get up. It was too chilly to go outside without dressing, so I got up and dressed, and relieved, before making and drinking a couple of coffees and a couple of bacon and egg sandwiches. The rest of the fellas were still sleeping. I was about to sneak off on my own when Blackbeard arose, and shortly after the rest of the group. Having already completed my morning routine, and as the tents were still too wet (frost!) to pack I was keen for a fish. I thought the others would be too, so I headed off telling them I'd hang around near the ramp until they arrived.

Only Doc came out, I wasn't phased, as I'd already caught 4 fish by then! All within a few 100m of the ramp, pretty much straight in front of our campsite! 2 nice pan sized ones and 2 little ones that went back to grow bigger. After a couple more circuits, and a couple more fish, I was tired of the same view so we headed over to the southern shore. Nothing on the way over, but trolling along the weedbank Doc got his PB brownie! A few minutes later and I had another fish on board as well. We trolled up to and into some more drowned timber before turning and going back along the edge of the weedbeds. Doc pulled ashore (to clean his fish?) and I called out that I was going to fish my way back to the ramp.

Heading back to the ramp I landed a few more fish. I couldn't believe the number of trout I'd caught in a few hours! I continued up past the ramp to the area I'd been fishing initially, and landed 2 more. 12 for the morning! Phark! 5 were kept, 7 released, including a couple of good sized ones, as 10 fish kept for the table was plenty. 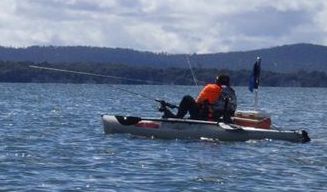