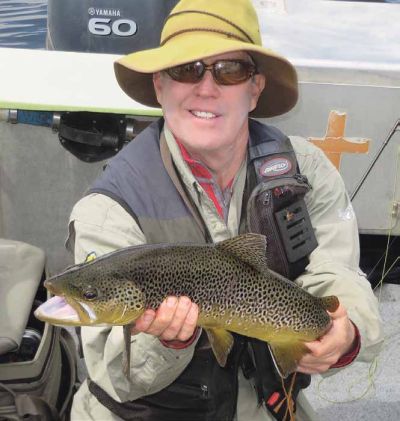 Presented from Issue 108, February 2014
All Arthurs fish are small this year. Myth Busted. I recently spent a day with a friend on a water that some people have deserted because they believe all the fish are small. They are wrong.

One of the delights of fishing is the friendship built up over the common bond. So it was with some delight that I accepted a call from Graham early in the season to catch up at his local club shack and fish Bronte. Graham is the sort of chap that friendship is never blemished by time. He represented Australia in the Commonwealth fly fishing championships in Wales but now prefers the friendly competition of mate against mate. Unfortunately our schedules didn’t suit for the Bronte match, but in the third week of January he responded to my call for a day on Arthurs.

Arthurs formerly held the position of my favourite water in Tasmania. A decade ago guided by Peter Hayes my son James and I had cut our teeth and learnt the basics of fly-fishing. Each day the father son combination compared their catch. Everywhere Hayes guided us fish fell to our fly. Drifting the rocky edges ever alert for the flash of gold, the instant strike and subsequent reward, lunches in a variety of bays, followed by drifting slicks and wind lanes seeking the signs that gave away the presence of another challenge. Evenings around the table were with my son conspiring with Hayes to bring down a father’s ego as his errors of the day were magnified, but there was no doubt Arthurs was a prolific fishery.

Over the intervening decade things changed, son grew up and was away to lands far off; Arthurs lost its pre-eminent position as my fishery of choice in the highlands. Fish numbers diminished, days of slick and windlane fishing became fewer and generally to the fly fisherman the glory and triumphs of former years diminished and replaced by waters that often seemed more crowded than the main streets of our capital cities. The Christmas of 2013 had seen me visit Arthurs on a couple of occasions, things seemed to be on the turn.

A day on the lake with Peter Hayes and his son Lachie reminded me of similar occasions of decades past except now Lachie replaced my son at a similar age.

Again a reflection of former years as several fish of two plus pounds came to the net along the edges at Jones Bay. Around Cormorant Point in the early evening and Tumbledown untouchable fish ignored our offerings as they flew suicidally after damsel flies between islands of kerosene bush.

So it was with some eagerness that arrangements were secured that Graham, and Jim his close fishing ally, agreed to meet me at the Jonah Bay boat ramp. We made a hasty departure for Camping Ground Flat. Several promising drifts but no interest saw a move to Hydro Bay, but the only sign of life here was a tiger snake winding its way between drowned trees.

By now the wind had picked up and we took refuge in the lee of an island that Graham suggested as always fishing well. Our thirst for action was quenched with the release of several fish over a pound. Lunch saw us tied to rocky island outcrops at the entrance of the Lily ponds. Just as the Jetboil produced its welcoming coffee duns started to appear curling around the boat in tantalizing numbers. They were shortly followed by fish eagerly harvesting the hatch.

Sandwiches and coffee were soon discarded and a likely drift set down the wind at islands edge. A likely fish that measured over three pounds stretched Graham’s line. Once released our discussions recounted similar fish from years past and the hope that this once most prolific fishing grounds in the highlands could be returning to its former glory.

By 3pm the wind had settled and the hatch disappeared as quickly as it started. Moving to the lee of Hook Island we covered a number of fish mopping up and weaving trails, several were missed due to inattention the vagaries of nature or the sharp spurs of native brush. But I must just tell you about the last fish hooked. Not far from the “Spirit“ a handy cast distance to a rise adjacent to a seam of flooded brush followed by the instant flick of the tail as a fine trout devoured a “Dan Dempsey” CDC quill dry. The battle saw the line and leader snaking through brush and bush. A steady side strain to wrest control resumed the fight in deeper water. The surging trout silenced discussion as each had seen that this was no normal trout!

The net was armed and trout led to the keep saw the specimen lifted to the boat for the routine digital recording for future memory. Jim armed with weight net Jim confirmed a brown trout at 4 ½ lbs undoubtedly a fish to good to be caught by only a single angler.

Into the evening with friendship rekindled our musings again centred on ‘the return of Arthurs’ a venue that we shall visit many times this season.