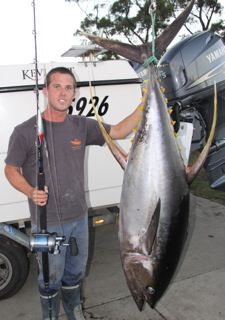 Well we certainly had some interesting weather over Easter with Friday night being the pinnacle of extremes. We had a few phone calls on Saturday morning regarding broken tent poles and ripped tent fly’s. Spare a thought for the Father and Son who spent the night on top of Black Bluff. There experience was character building!

There were some good fish caught despite the weather. It is great to see that St. Helens is still fishing well. Two good Yellowfin Tuna were caught over Easter as well as plenty of Stripy Tuna and a few Albacore. This would have to be one of the best seasons there for a long time.
Eaglehawk Neck is also starting to fire. There are good numbers of Bluefin being caught around the 25 to 30kg mark and one around the 100kg mark was caught over Easter. It will be a popular destination over the next couple of months.
If you are into Game fishing then you will find a couple of good articles written by local guru Daniel Paull and another by John Orchard in the latest Tasmanian fishing and Boating News.
Lake Plimsoll would be worth a visit before the end of the season. Brook Trout like cooler water and recent snow should help cool the water considerably. I saw a photo of a fish caught there last week and it resembled a football rather than a fish.
There are reports of good numbers of Australian Salmon in the Stanley area. There are being caught at the wharf and that leads me to suspect that East and West inlets would be worth a look. Snotty Trevally are also being caught at the wharf but they are still fairly inconsistent.
There was a good school of Australian Salmon at Sulphur Creek on Tuesday. A couple of boats were in the right place at the right time and got amongst them.
Any Brown Trout that are caught in the next three weeks will most likely be full of spawn and are usually not very good to eat so if you are catching them it’s a good idea to release them.
The Pirtek fishing challenge is on this Sunday 15th April and entries have been extended till 11pm tonight. If you want to enter or find out details go to https://pirtekfishingchallenge.com.au .

Gadget of the week.
Rapala XRap Magnums
These lures are great Tuna catchers and the ones pictured are part of the Aussie Special Range developed for our conditions. Check them out at Tassie Tackle and Outdoor 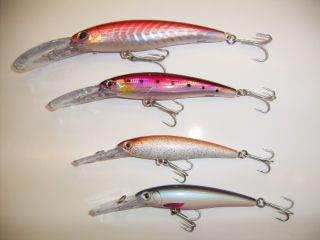 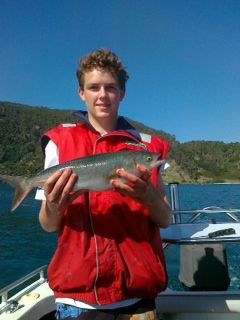