More lousy weather forecast for the next few days I thought I would get a few hours of trout fishing in today seeing most of the day was going to be reasonably good before the change arrives later on. I was in two minds whether to head over to the Meander River at Meander or to the shorter trip to the Mersey River at Weegena, I chose to head to the Meander River. I was originally going to fish at Weegena then after checking the BOM site to see that the water level at Meander had dropped to a decent wading height helped me decide where to go.

It was a late start because I had been to Devonport early on (7:15am) in the morning to do our fortnightly grocery shopping, it was 10:20am by the time I arrived at the Meander River. It was mainly overcast conditions to start with and still quite cool with the water temp sitting on a low 5 degrees, the good thing was that the river had dropped several inches since my last trip. Starting the spin session off using a Mepps Aglia Furia with a long cast directly up and across to the left hand side of the river I had a solid brown follow the spinner all the way in, but wouldn't take the lure.

A couple more casts into the same area and a twitch and light jerk retrieve saw the same trout follow the Furia again with same result. I tried a several other Mepps spinners as I slowly made my way upstream without sighting a single trout, even flicked a couple of hard body lures around, still no signs of a trout. The river was running very clear and the rocky river bottom was as slippery as a ice skating rink due to it being covered in a brown slimy algae, not only that it was heavily silted. Even with my spiked felt soled wading boots on I couldn't get a decent grip on the rocky bottom and they're normally great in these conditions.

It was a real struggle keeping upright up as I fished my way up the river staying close to the shallower right hand side of the river. Normally I would be in the middle of the river but with the river bottom being like it was I wasn't going to risk taking a dive into the five degree water. To make matters worse the trout weren't here in good numbers either, in fact after covering three hundred meters of river all I could manage was a follow from one more half interested trout.

Sick and tired of trying to stay upright I decided it was time to get out and try elsewhere. I took a short drive to Western Creek to see if it was worth spending some time in it chasing trout. Once there I found it to be very low, it was also very clouded and didn't look all that good for fishing. I did flick a lure in a couple of deeper discoloured stretches of water for one hook up from a small/medium size trout that tossed the lure as fast as it took it. I tried a couple other stretches of the creek but the spinner was getting fouled by a brown slimy algae that was drifting with what flow there was. I wasted forty minutes fishing at the creek, it was time to move elsewhere.

I headed off to the Mersey River at Weegena seeing it was on the way home, I really had nothing to lose by checking it out. It couldn't be any worse than where I've been so far, in fact I felt it may even be the best decision I've made all day. It was 12:35pm when I was in the river, the weather conditions were much better here than at the Meander River. Here there was scattered cloud cover & the air was much warmer too which I was happy with, not only that the water temp was sitting on 10 degrees plus the river bottom itself was like the Meander, not in the best of condition.

I started off fishing a nice waist deep medium to fast water using the cast and drift method with the Aglia Furia. After twenty minutes or so there wasn't a sight of a fish in a stretch of water that looked so perfect for holding trout. To my left was a small shallow side water that ran next to & under some fallen trees and debris that had come down the river during the Winter months. It did look fishy, not only that there was a nice bubble line on it and quite a few caddis moths hovering above the water surface. Being a shallow run of water that had several snags in it I changed over to a small floating lure so I wouldn't get snagged on the debris in the water. Where the water flowed under the fallen trees was the the perfect holding area for a trout, an accurate cast first up was needed. If I didn't get it right and lobbed the lure into the fallen trees/debris and there was a trout there, it would be gone when I moved in to retrieve the lure.

My first cast was spot on, no sooner had the lure hit the water under the debris it was smashed by a solid trout, at last I had a fish take a lure. Better still was after having a good tussle with this trout it stayed on all the way into the landing net. The clouds had thinned out to what they were and there was full sun on most of the water & with the water being so clear meant it was going to be tough catching a trout from here on. I went back to the Mepps Aglia Furia again to fish along the river bank that was lined with reeds in the hope there may be a hungry trout sitting near them. I did have a couple of follows from two very nice browns, but being in full sun they didn't stay behind the spinner all that long. I finished up getting out the river to bypass the long shallow waters then get back into the fast water runs, they'll be the best areas for me to pick up a trout.

Once in the fast water I used the cast and drift method with the Aglia Furia it took close on forty minutes before I had a small brown take the spinner, it was well hooked and made it to the net.. Not long after that while fishing another fast water I had a hit and miss before reaching another long wide slow flowing stretch of water. I bypassed that one too, it only the fast water I'm after. It was in the last fast water that I caught my third and last trout of the day, I did hook and lose three others after that while using the Aglia Fluo brown trout spinner. I could have fished on a little further but the body was telling me different, I called it a day at 3:30pm with just the three trout caught and released from six hook ups. At the end of the day it was third time lucky, had I come straight here this morning I feel I would have caught and released quite a few more trout. 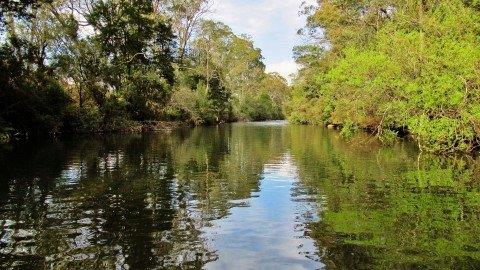 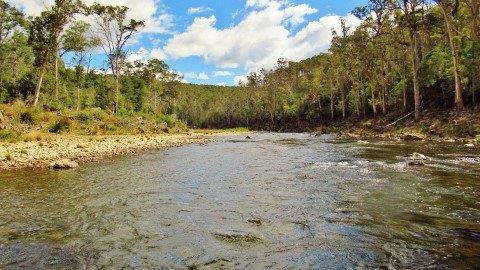 Good flow in the Mersey 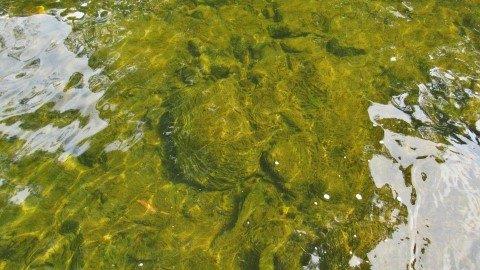 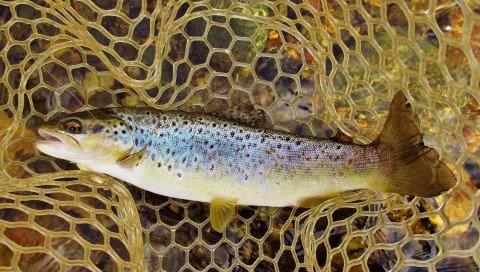 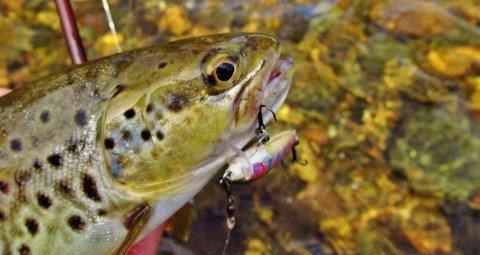