Seeing as it's been a few days since my last fishing session and with the weather being more settled for the next day or so I headed back to one the tannin streams again, mainly because the larger rivers were still running on the high side. One thing I was sure of was that the small stream I headed to would be at a nice wading height, the only problem would be the amount of trees that would be across the stream. A few weeks ago we had a massive storm in the area which brought down thousands of large trees in several areas across the state. A few of my favourite streams just happened to be in one of those areas that was severely hit by the 165kph winds. Anyway, by the time I parked the car and made my way to the river it was nearly mid-day by the time I hit the water.

I started the spin session off using a well used Mepps #00 Aglia Mouche Noire inline spinner, in fact it was so well worn It only had one hook out of three left on it. I've always said it only takes one hook to catch a fish and this little lure has done well for me many times over. The first cast was into a nice flat water several meters ahead and to the left side of the stream, no sooner had I started to retrieve the spinner when it was fish on. A solid medium size brown had taken the lure, that fish made a couple of hard runs before making a leap from the water, that's when it tossed the spinner. So my choice of using the old spinner wasn't a good one after all, so a change was made straight away. The replacement lure was the #0 Aglia fluo brown micro-pigment spinner, another of my favourite trout lures, also one that was a little worse for wear. The reason I used this worn spinner was because I forgot to replace it after my last outing so I have no choice but to use it today.

The change to the slightly heavier spinner was a good one due to the strong flow that was in the river, the lure will run a little deeper than the very light #00 1.5 gram spinner. It wasn't all that long before I had a nice solid brown take the spinner, this fish fought hard for a short time before it eventually hit the surface and I eased it into the net. This fish was a beauty to catch first up, the colours were brilliant, these tannin water trout have to be the best coloured fish of any of the brown trout that I catch in the large clear water rivers I fish. This fish was a decent size for a small stream as well, after weighing it in the net then deducting the net weight it left the trout at 485 grams, a good size fish for such a small stream. Ten minutes later and a little further upstream I picked up my second brown, this fish was a little smaller and in excellent condition, these trout have certainly fattened up over the Winter by the looks of it. The further up the stream I fished the more trout I came across and they were aggressive fish too.

Twenty minutes into the spin session I had a pretty good run with five trout being caught and released, the only downfall was hooking and losing four trout, three of them in a row. Then to top it off the wind arrived from the North East and that didn't help the cause either, it can shut the trout down for some reason. The air temperature really dropped as well, it was quite mild to start with, once the wind arrived it really cooled down fast and I noticed a few drops of rain hitting the water. In the meantime I also made a change of lure seeing as the trout had more or less gone off the #00 Aglia Fluo brown spinner, I gave the #0 Aglia rainbow fluo spinner a short run without a sign of a trout. I didn't stay with the rainbow spinner all that long because the water ahead of me was knee deep so the heavier inline spinner wasn't needed.

The lure of choice this time was a small #00 Aglia Mouche Noire, it was a brand new spinner too, no messing around with an old one this time. It worked a treat on the trout, it wasn't all that long before I hooked and landed a small/medium size trout. With the sky becoming darker I was sure the rain was going to get worse as time went on so I pushed on a little quicker than I wanted to, thankfully I was lucky enough to pick up three small/medium size browns on the way. The rain did arrive so I decided to call it a day and made my way back to the car, by the time I reached the car I was a little on the damp side.

I had just removed my wading gear when the rain eased off and the sun broke through the clouds. Once I was out of the wading gear I wasn't going to put it back on and head back to the stream, as much as I would have liked, my day was done. Overall it was a reasonably good spin session with eight trout being caught and released from a dozen hookups in just over two hours. All going well with the weather, I will hit the tannin waters in another area tomorrow. 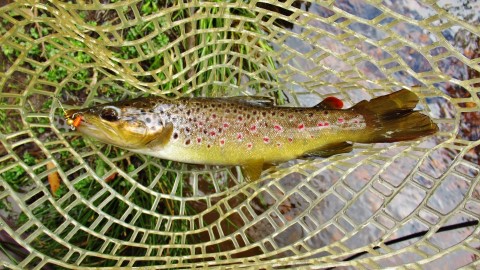 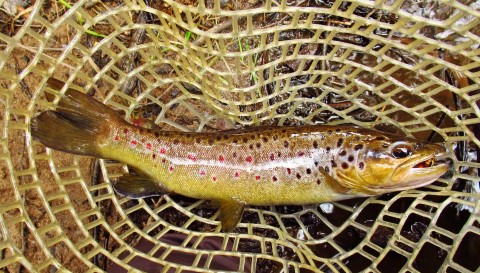 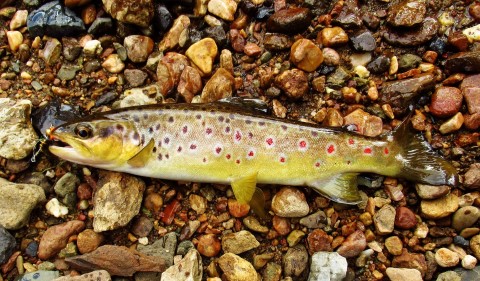 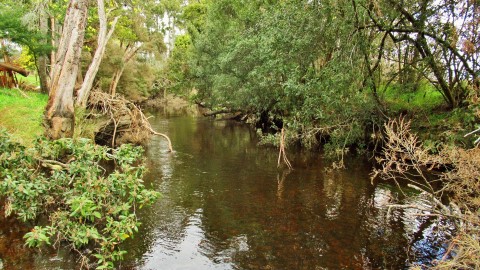 It was good to be back in the water