Tides - Cause and Effect - Bureau of Meteorology

Presented from Issue 107, December 2013
The Bureau of Meteorology has updated the way it displays tide information on its web pages. Mariners can now access a map of Australia and zoom in on their area of interest to view the stations available. The navigation of this map is similar to google maps. See http://www.bom.gov.au/australia/tides/

The first thing mariners will notice is there is a lot more tide stations that have tide times and heights; previously many only gave a time correction from a standard port.

There are cautionary notes that come with some of the new tide heights and it is worthwhile to explain how the Bureau of Meteorology calculates tide information.

First and foremost the heights and times you read from this site and any tide book refer to that part of the sea level that is caused by astronomical influences only.

If your chart shows a depth of 2 metres at spot X in a tide port, this is the depth that occurs at the LAT. The tide prediction for that port/area for a given day may be a high tide of 2.2 metres and a low of 1.1 metres. When on your vessel over the spot X, at high tide the water depth would be 4.2 metres and at low tide 3.2 metres. You may have some old charts that have different datum; check in your chart title. 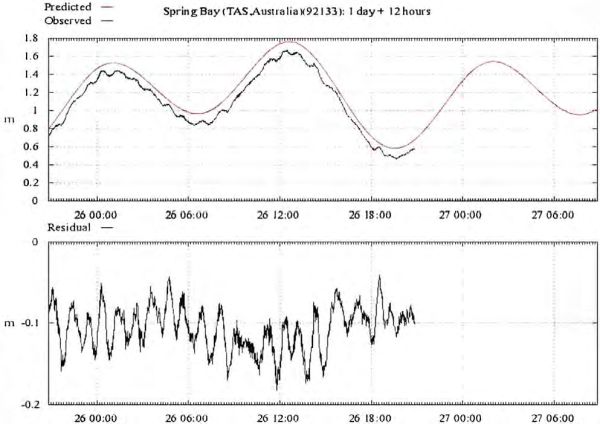 There are other factors other than the tide that can increase or decrease the sea level in a given area. The air pressure changes the depth of the water. High pressures “push” the water level down and low pressure allows it to rise, in the southern Australian latitudes the water level changes about 1 centimetre per hectopascal. Wind can either blow water into an area causing the water level to rise or blow it away causing it to fall. An extreme example of wind and air pressure working together to change sea level heights is a storm surge from a tropical cyclone which can add many metres to the sea level.

In some large bays seicheing can occur. This is the natural wave harmonic of a particular bay. It is bit like try to carry a large tray of water; the water slops back and forth. This seiching causes the water level to rise and fall.

The graph is from the tide gauge at Spring Bay in Tasmania. In the top portion the red line is the predicted astronomical tide and the black line is the actual sea level recorded. The reason for the difference in this case was a large high pressure system sitting over Tasmania (around 1030 hectopascals). This high “pushed” the water level down around 10 centimetres.

The bottom part of the graph is the sea level with the astronomical influences removed. The fairly regular rises and falls in water level on this graph are caused by seiching in the bay and occur about every 30 minutes and vary the water level by about 20 centimetres. 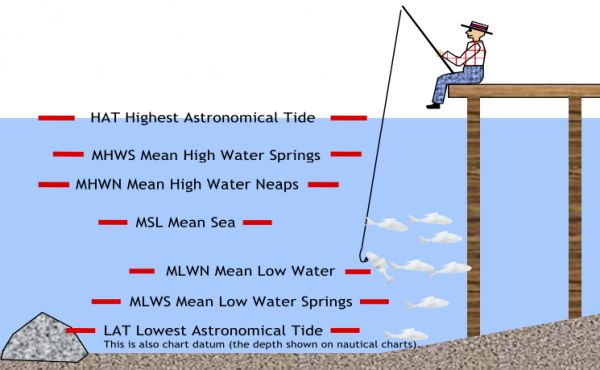